It was still a bit windy, 20mph and we set off at twenty to ten, the boat behind leaving a little bit earlier. We met a few boat between the Lazy otter and Hermitage lock, plus pulling over to let a couple of cruisers pass.

We passed our first fishing match of the season, if the cars had been much closer they would have been boats. 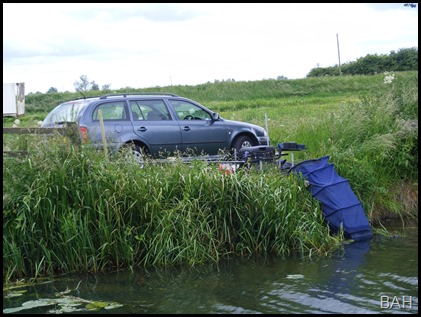 We were followed by Little Terns trying to catch fish in our wake, we only saw one successful dive resulting in a small fish. 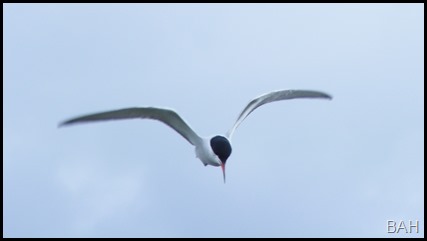 The most signets we have seen this year up to today was 4, this pair had managed 7. 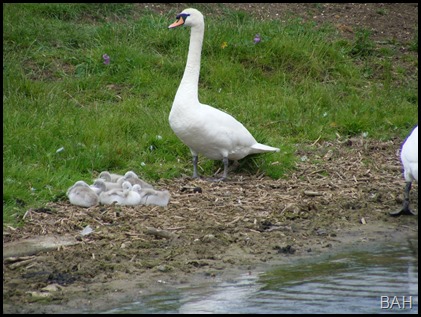 The Oystercatchers were also on good form swooping around. 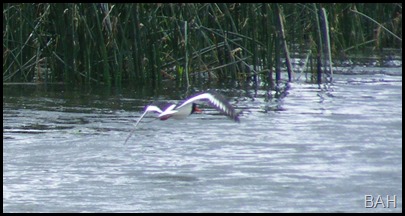 When we arrived at Hermitage Lock the two cruisers that had passed earlier were still waiting to go up as there was a cruiser coming down. By now another cruiser had caught us up, they had only just bought the boat and yesterday was their first time afloat, they squeezed in the lock behind us. While we were waiting an EA gent came down to check both our licenses, he had visited the previous pair as well.
There is now a nice new landing stage above the lock for boats coming down to wait on. 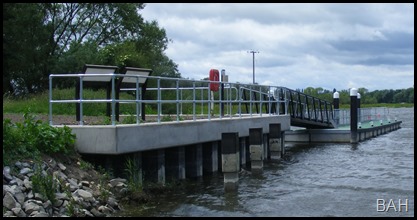 The boat that we had shared with overtook us on the tidal stretch as I expected, but when we got to Brownshill the two boats ahead or us were just entering the lock and our partner was waiting on another brand new landing stage. 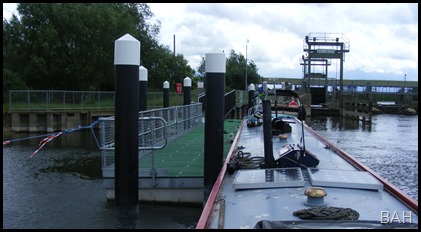 I came in slowly behind him, but the cross wind and water flow from the weir meant I ended up laying against the two uprights and no where near the landing stage. I was happy to just sit there but slowly the boat came round by herself and Diana was able to get off the bow and make fast. As you can see the landing stage is about 60 feet long, OK for two cruisers but a bit short for a cruiser and Narrowboat. The cruiser entered the lock first, my heart was in my mouth, last time I shared this lock I went forward and touched the boat ahead, The row that followed really spoilt my holiday. I went to put the stern rope round the first bollard to hold back on, No chance, EA have put a “Safety Fence” on top of it so you can’t get a rope over it, so it was centre rope back to the next one to make sure we didn’t drift forwards.

We passed the Pike and Eel with all their moorings empty, what a shame we had eaten dinner on the Old West, we could have stopped for Sunday Lunch.

Passing The Old Ferry Boat Inn at Holywell it was good to see that the “No Mooring” have been removed, The sign for the obstruction is also gone, so hopefully that has been removed as well.
We approached St Ives lock to see our locking partners disappearing into the lock and then the gate going down, obviously the new boaters had not looked back before closing it. Diana walked up just as they drew the top paddles but we didn’t say anything.
We decided to moor in St Ives, We knew the bank side moorings inside the basin behind the hotel were shallow so decided to try The Waits, but they were full, so we backtracked to the basin and went in managing to get within 2 foot of the bank, however the hotel side is piled and there is a straight section about 65 foot long where at least at one end it was deeper. Also the basin at this point is about 60 foot wide, so I turned round and we are now moored in front of the bedrooms of the hotel. 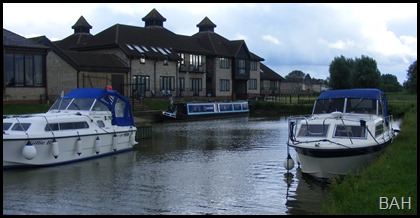 Great oyster catcher pictures, Brian. We've just had a week in the Lake District and found that there was a pair nesting (well, just a couple of eggs in a depression in some rocks, truth to tell) nearby. None of my attempts to take photos were even vaguely successful.