Just as we had finished mooring yesterday it started drizzling which was still going on when we went to bed. This morning it was still drizzling, that sort of weather that really wets things trough, we set off at 10 am and the weather started to brighten and by the time we stopped at bridge 2 for shopping there was a bit of sun up in the sky.

We got held up a bit at Autherley Junction as a boat coming up got stuck, it was a full length Black Prince style boat with the rubber faced rear fender, that was hard against the top gate and they couldn’t swing the gate passed the rubber bow fender, luckily the boat behind came up and told them that the rear fender is hinged and you can lift it it. It had all the looks of a hire boat with an inexperienced crew or youngsters but no indication if it actually was a hire boat so could have been a school or Guides etc. Once clear of both the lock and the boat waiting to come into it we turned right on the Staffs and Worc canal and 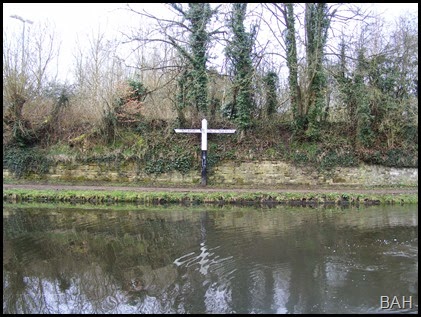 headed down to Aldersley Junction where it was sharp left and up the Wolverhampton 21. All the locks were against us but the weather was just about right, not to hot, little wind and no rain. The paddle gear on the first lock is at 90% to the lock so you 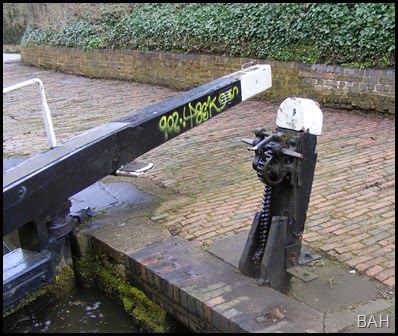 mustn’t step back as you wind the paddle, it is also below the top gate.

One of the locks, I failed to get its number has an unusual brick piece build on the end of the lower wall. 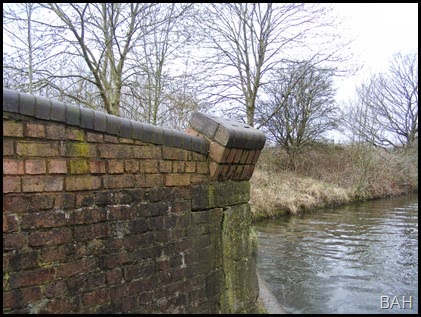 From the time on the photo it must be about number 15 or 16.  At lock 13 we saw a boat coming down so waited until they arrive. 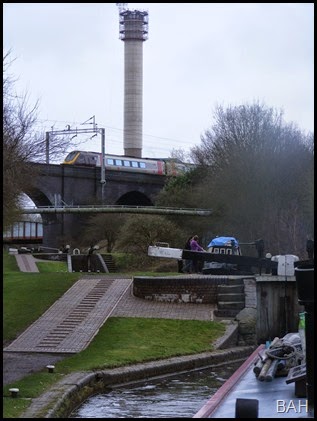 We were greeted with two bits of information, firstly they had got all this way without a key to open the security bolts and had been using a pair of sniped nose pliers, I was able to give them an old one I had found and secondly there was a boat going ahead so we only had about 4 locks with us and then the drizzle started again. It didn’t drizzle for long, it soon turned into real rain. It was also here that we met a CaRT man who informed us that the pound above lock 3 would probably be low as the gates 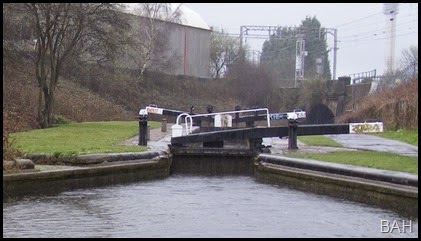 leaked and he wasn’t wrong. It took a bit of effort getting out of 3 and also into 2 but the pound its self gave no problem. The pound above 2 was also low, but not so bad, arriving at the top lock we found that the bottom gate is held together with a 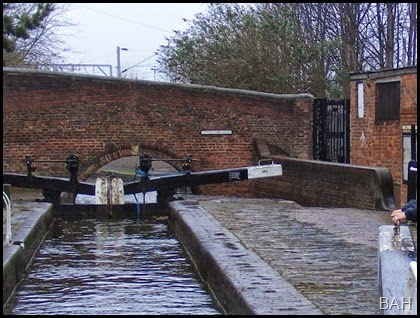 webbing strap and of course just as we left it the rain eased off. It didn’t stop until we moored on the visitor moorings opposite the old warehouse and basin.

For those that are interested the 21 took us exactly 3 hours, had we not met the boat coming down it would have been a bit shorter. 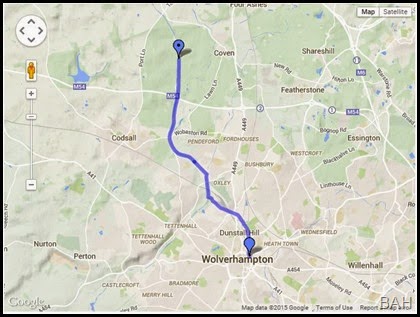 That looks like the front of a Sea Otter , the boat above the lock with the blue stuff on the roof