It was a good job I daubed that gloss paint on the primer  yesterday afternoon and didn’t leave it until today, as we woke to heavy rain, thankfully it had stopped before we were ready to leave.

A few minutes after ten and we were off through the swing bridge that CRT have still not fitted a lock to and turned right down the Trent and Mersey Canal. As I waited for a boat coming up I spotted these two drakes sat on a roof by the lock. 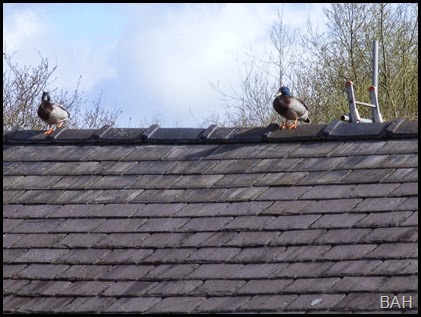 A good place top keep an eye out for the odd female who may be swimming around.

We followed a boat down all the rest of the locks so turned each one. Last time we were here there was a large hole lined with concrete rings beside Hunts Lock, that has now been filled in and it looks as if they pulled the rings out. See my blog for Sunday 23 November 2014

As we approached Common Lock on the off side, at the long term moorings a chap was just starting his Bolinder engine in his converted working boat, smoke rings and diesely smoke for a few minutes until it got hot, the sound is wonderful.

We carried on passed the winding hole in Alrewas and moored by the railings. It was surprisingly windy as we approached the town with the wind funnelling under the A513 road bridge

The objective of the visit was to buy some home made chutney from a house in the town down Post Office Road. 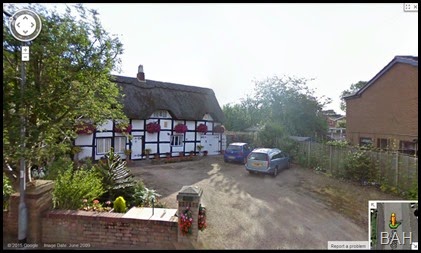 Here is a Google Street view of the house.
It is NOT by the Post Office as the old Post Office has closed. We ended up buying 2 Jams and 2 Chutneys. We then visited the butchers to buy tonight's dinner before returning to the boat.

We had to reverse back a few hundred yards through the bridge to the winding hole, there was a steady stream of boats coming down through the lock, winding and then going back up, we slotted between a couple of them and turned ourselves to go back up. It turned out that the Litchfield Cruising club were having an outing to celebrate a members birthday and were all gathering half way between Bagnall Lock and Common Lock where there is a nice spot to moor beside the towpath.

Alrewas were holding a cricket match beside Bagnell Lock, I am not sure when the cricket season starts as the football is still in full swing and its the earliest match I have seen.

CRT are doing a lot of work just above Common Lock on the lock moorings, the digger arrived on a boat, I don’t know how far it came as I don’t think it would have fitted under the bridge at the tail of Bagnall Lock. 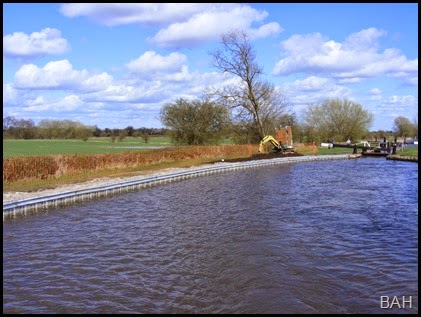 We continued up to Fradley Junction meeting yet more members of the Litchfield Club. At the junction we went straight ahead going up Middle and Shade house locks. We were assisted by the crew from the boat 2 boats behind, the set ahead for us as they were hoping to reach Haywood Junction tonight and it was already 4 pm. and its another 8 miles and 3 locks to go.

The moorings above Shadehouse lock looked quite full but there was about 60 foot between the lock moorings and the first moored boat which suited us fine. 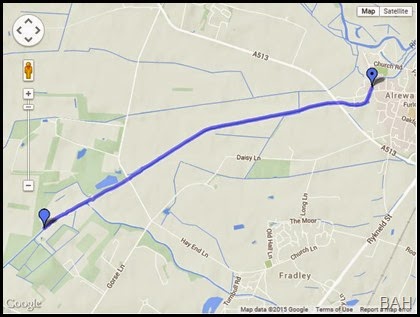