Last night we ate at Piccante at Star City. there was one boat moored there when we arrived and before we went for dinner a second arrived, there was probably room for a forth on the end but no one else turned up.

This morning we left backwards at 10 am, the two hire boats had left earlier of course. At Salford Junction I noticed that they had removed the sign requesting boaters don’t hit their wall.

Last time we were this way the CRT contractors were down below the Curdworth flight cutting the trees back on the off side, bow they have completed it up to the Tame valley canal. 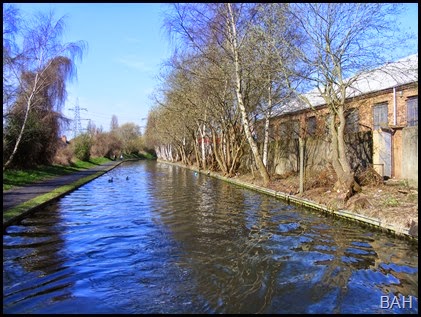 At the factory entrance at Troutpool Bridge they have brightened things up a bit with flower boxes on the bridge, but its nothing compared to what it use to be like at the Cincinnati works, which is now looking a bit vandalised. At Minworth top lock a boat was just locking up so we thought the lock gods were with us again, how wrong can you be. After that every bottom gate was wide open until we came to lock 4 on the Curdworth flight where a CRT Volunteer turned that and 5 for us and after that we met a boat coming up. We were told there was a single hander ahead of us going down and he was just leaving them all open.

We deposited the duvet that we collected yesterday and other rubbish in the skip by the top lock, in the skip were brand new still wrapped vertical blind rails, shame we don’t want any. The high speed towpath now runs from Salford Junction to Minworth Service block, a nice 4 foot wide strip of tarmac.
Several years ago British waterways had problems with the 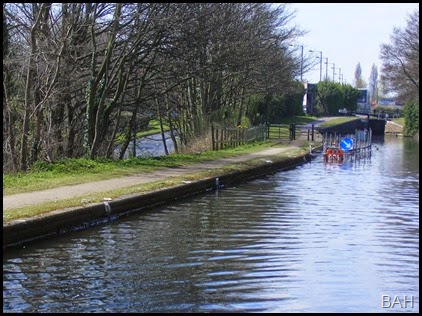 embankment below the Minworth bottom lock so the scaffolding in the water holding shuttering against the bank can be considered semi permanent, so I think CRT should invest in some proper signs saying “No Mooring” and “Underwater obstruction” to replace these encapsulated A4 paper excuses that they have pinned all over the place. 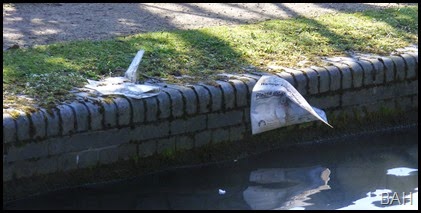 Work is still ongoing at the Knigsley Arms its 2 years since they received planning consent to build a 3 story bedroom block and other changes. I wonder how long it will take for them to recoup their outlay. 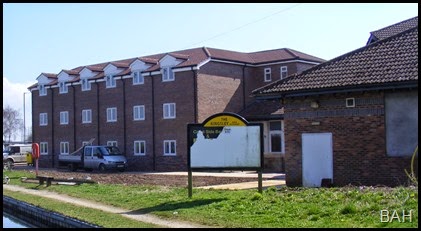 At lock 1 of the Curdworth flight the bywash runs in a long channel covered by reinforced glass fibre grating, I noticed one of these was missing and I could see it at the bottom of the bywash, so being the good chap that I am, while the boat was filling with water at Duton Wharf I walked back, retrieved the grating and replaced it in its proper place.

As we came down the flight I noticed these recesses in a couple of the locks and I wonder if anyone has any idea what they are for, they are quite close to the water level of an empty lock and look is if they have a steel bar running the length of them. 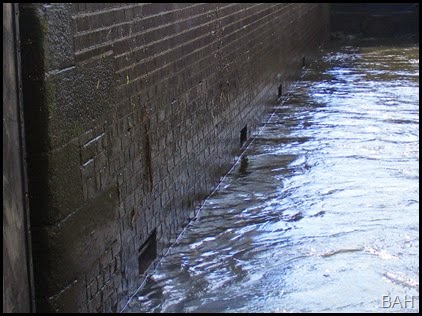 We carried on down the flight meeting a second boat and moored for the night below lock 8 at outside The Dog  and Doublet pub, it was surprising how busy it was on a Tuesday afternoon with people sitting outside in the sunshine. 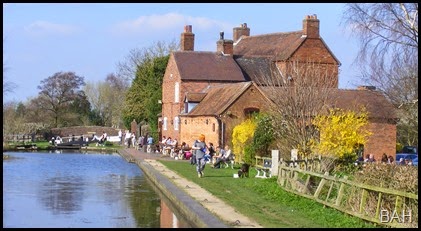 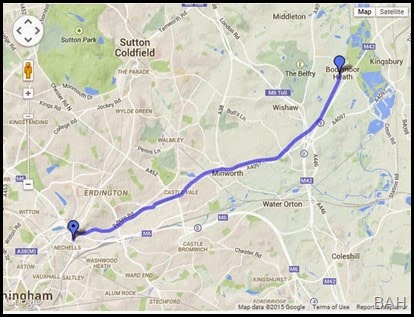 I'm glad to hear that the Dog & Doublet is still trading. When I lived in Tamworth it was a pleasant walk there and back for a meal and a pint or three.