It was quite noisy last night until a little passed midnight and then things quietened down dramatically. The piece of land we were moor against is only accessible by water or a long ladder, so no one wandering passed the boat at all. having said that we didn’t hear anyone on the towpath opposite ether.  The first thing we did this morning was to go into the ex- Shropshire Union Railways and Canal Company's basin 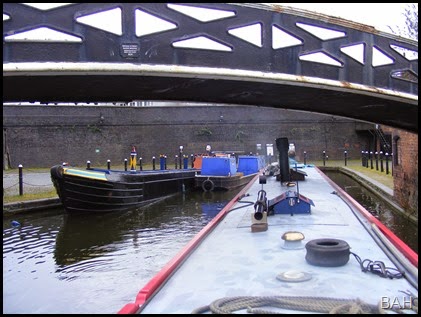 was almost opposite to fill with water and dispose of any rubbish we had onboard.

The building to the left of the basin is a warehouse that was at one time owned by The Midland and Coast Canal Carriers ltd. and then became the property of Fellows, Morton & Clayton Ltd. 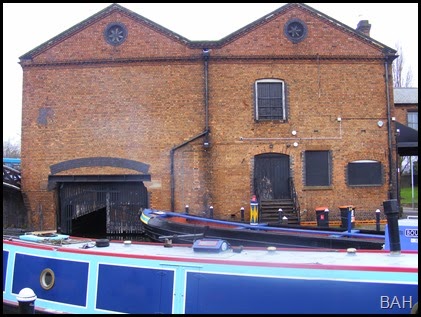 when they took over the company. later British waterways board owned it and in recent years has been a night club now called The Boatyard. One of the interesting things about the building is that boats can actually go inside it to load and unload using a crane from the floors above. Once full of water we reversed out and continued south along the BCN Main line through Wolverhampton tunnel which has a multi story car park on top of it.

There is some “interesting” canal side sculpture along the canal as you head towards Tipton, this is 3 interconnecting rings, I am not sure what it represents. 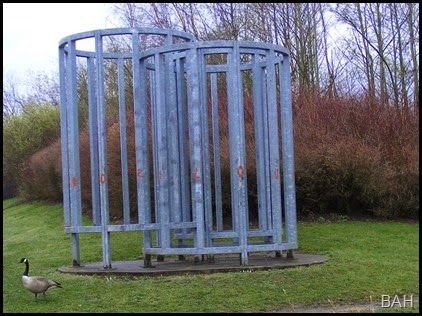 You pass a couple of junctions on this canal before you get to Tipton, the first is the Wyrley and Essington which goes all the way to Anglesey Basin, the other is the old Wednesbury Loop that now only goes as far as the CRT workshops at Bradley. Or destination was straight ahead. Soon we came to Cosley Tunnel which is a bit longer than the others we have done this week at 360 yards. 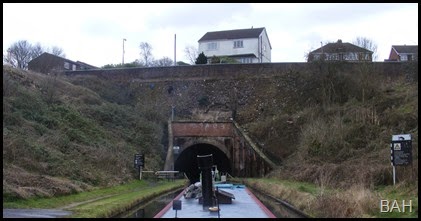 British Waterways use to have regulations about un powered craft using their tunnels, in most cases it was not allowed at all, CRT have relaxed a lot of these allowing canoes to use a lot more tunnels. This is the old British waterways notice. 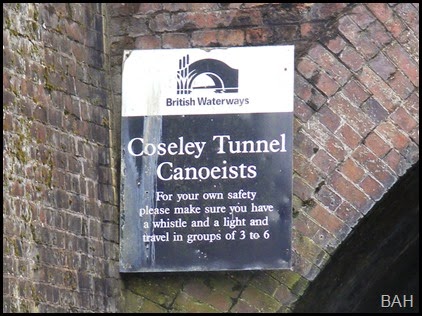 As we entered the tunnel I could hear shouting at the far end, but when we got there there was no sign of anybody. As we left the tunnel we found out where they where as stones rained down on us from above. I am glad our roof is in need of repainting as we have at least one chip 25mm across not far in front of where I was standing. As you can see they came down from quite a 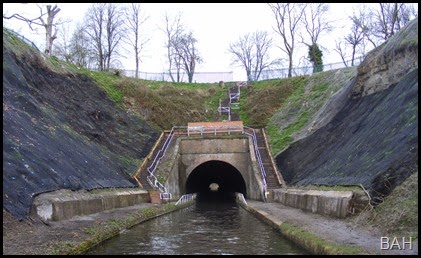 height.  CRT have gone a lot of work this winter stabilising the bank on the tunnel approach which has probably given them a good supply of rocks to throw.

From here it is only a short way to Factory Junction where we turned right to Tipton. There were already a lot of boats here when we arrived so we sailed through and winded at the junction of the Dudley No1 canal and then made our way back through 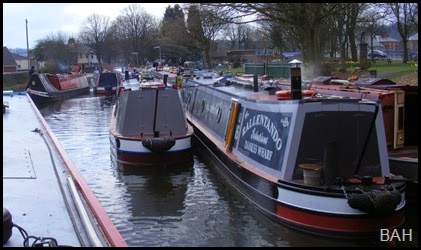 them all again to moor on the end. Since we have been here, due to a boat fitted with rather large speakers blasting out what they think is music mooring at the south end by the park, 3 have the boats have moved up by us, I expect there may be more. 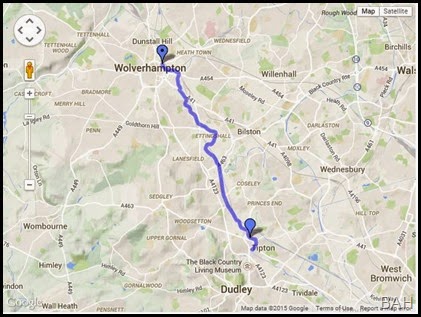 It always seems to rain stones in the holidays....