Last night we had dinner at The Stanley Arms, not posh grub but good home made pub grub, I had a pie made with real pastry all round, not a piece of puff pastry floating on the top of a dish of something.
This morning I moved up to the lift waiting area at 9-30am as there was a boat waiting and I thought we may get to share, but no there were two going down so I had to pull back to the moorings. We had another go a little before 11 just as 2 boats came up and went in almost straight away.
There was bit of a delay before we started to move, it seems a piece of rope was trapped in the gate of the other chamber and it was leaking badly as we could see as it went past. I don’t know how that effected the level in the caisson as there was a boat in it. 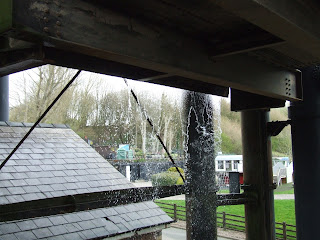 Once clear of the lift we turned down stream and at Barnton I spotted the first Bluebells I have seen this year. 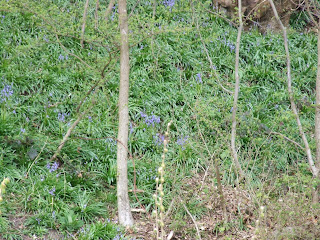 A little further on and the hill side was awash with gores all out in flower. 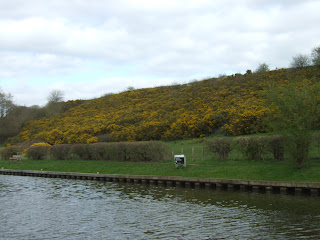 We carried on down to Saltersford Lock which has been closed for repairs for some time. They have finally managed to pump the lock dry after having problems 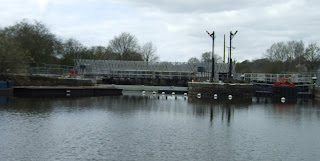 sealing the stop planks at the bottom end. We stopped on the lock moorings and walked down to see what we could see, but you can’t really get close enough with all the fencing around it.
We carried on up to Northwich, CRT have completed installing the new pontoons outside the cinema, they are even accessed by a locked gat, so remember to take your BW key with you. This moorings are for only 24 hours with no return for 7 days. 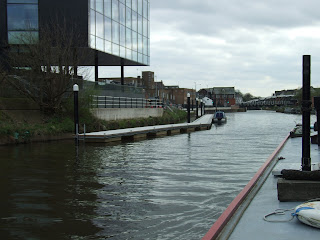 We moored just below Hunts Lock for the night as we are booked to go through at 10am in the morning. Looking over to the dry dock we can see that there is a tug 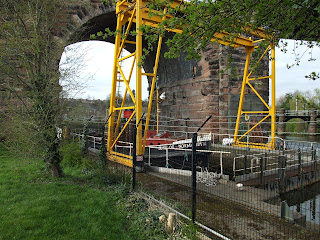 in there having some work done, I hope they are finished before Saturday when we should be going in. 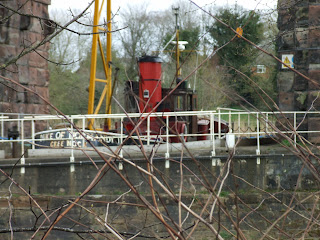 Recently CRT issued an advice notice about Habitat Rafts being launched at Northwich and I wondered what they were talking about, today I found out. We had already spotted one moored to the bank in town, lets hope they don't float away and the tethers are long enough for when the river is low in the summer months. 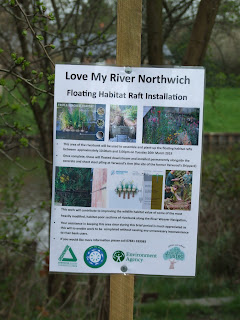 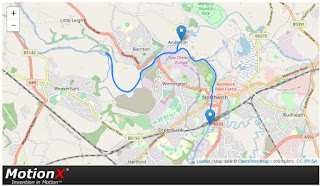