Last night was a full moon, for some reason known as a "worm moon". I did photograph it but it just came out as a large white dot, the Tata factory was a bit better but a little shake on the long hand held exposure. 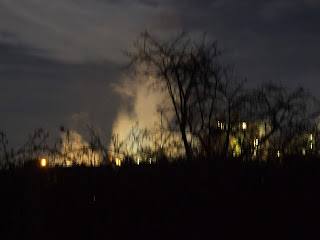 This morning we were off at 1030 am. A Canal time hire boat had already passed but we passed them moored up a few hundred yards along the canal.
This year we have seen the demolition of old buildings between the canal and Witton Albion football ground, they are now in the process of clearing all the trees from this site. 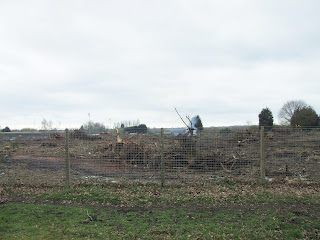 The old warehouse across the road from the Lion Salt Museum at Marston has been completely demolished and only the floor pan left in place to show where it stood with an interpretation board. 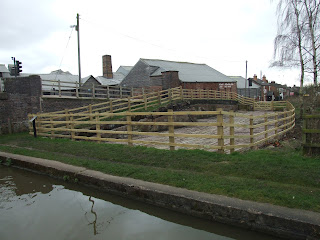 We stopped at the Anderton services to top up with water as we will be on the Bridgewater tomorrow so only a few facilities for boaters.
Passing Anderton Boat Lift this Cormorant was sat on the offside bank, he waited for me to take this photo before scuttling off. 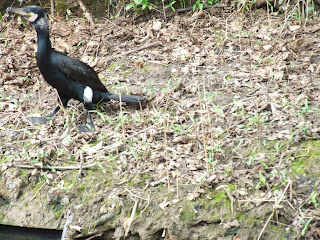 It was then that we met the only boat of the day. We got the timing wrong for Saltersford Tunnel arriving at half past twelve, so we had lunch while we waited for our slot at one 'clock. As we approached bridge 206 we could see a Heron standing on the parapet, such a shame it was the far side parapet and not this side, as we got closer he was disappearing so this was the fullest shot I could get. 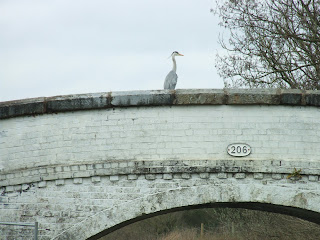 By now the weather was warming as the sun pushed through the clouds, we carried on past the site of the Dutton Breach before mooring for the night on some rings a short way before Dutton Lock.
Today's Journey 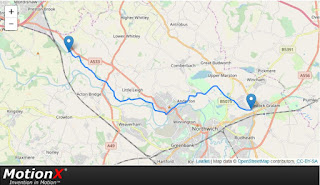