Day :Saturday
Date :2 March 2019
Start :1015
Finish :1300 Wincham Bend.
Started a little later as I had a couple of jobs to sort out first. Just as we pushed off in the sunshine two boats came towards us so Big Lock would be ready, No, the bottom gates leak so much it was already half empty and we had done about a quarter of a mile.
Its good to see that CRT are making a proper job of raising the concrete edge at Croxton Flash, this has slowly been subsiding and last year CRT screwed a piece of wood along the top to stop the water lapping the towpath, ( see my Blog) now they have raised the concrete several inches above the water.

We have been out for 15 days and until today had not seen a single Kingfisher, then we saw two close together, so I suspect they were a pair, one flew off but the other dived and caught a fish, by the time I got the camera it had just swallowed it. Then a short while latter we saw a third. 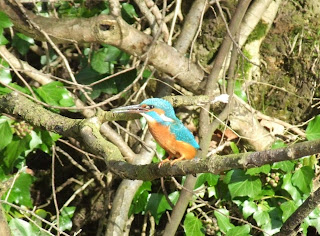 The sun stayed with us until just before we were going to turn round at to the north of Wincham Wharf, then it started to spit with rain, we winded and then moored just by Wincham Bend, we had only just tied up when it started raining properly.
Today's Journey 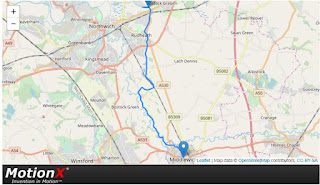 Your comment about whether the kingfishers were a pair got me to thinking if there is a difference between the sexes. Apparently the male bird has an all black beak and the female has a pinky/orange tinge to the lower beak