Last nights stop was ace, no cars, trains or geese, just silence, that's one for the book. Being a lot cooler made it better as well, best night this trip.

This morning we were off a little after 10am with not much ground to cover, stopping briefly outside Fazeley Mill Marina to dispose of the rubbish that came off the prop yesterday plus the domestic stuff. Popping through Watling Street Bridge at Fazeley Junction I had to wait for boats from both direction before moving to the water point to refill the tank. I was now facing the wrong way so we winded in the junction before heading down the Coventry Canal. Looking back at the junction Tolsons Mill is being converted to flats and is full scaffolded out. 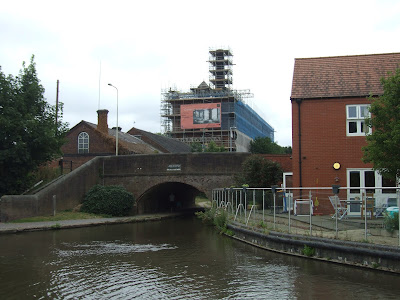 There was quite a bit of activity at Glascote locks with two boats going up ahead of us and none coming down, so we followed the second one up only for a boat to appear at the top lock, but by the time they had closed up and dropped down we were out of the bottom lock and hadn't held them up at all. We also had to turn the top lock and by the time we were up there were two boats waiting to come down and three behind us waiting to come up. We carried on to the next bridge and stopped both for lunch and a visit to the Co-op which is very conveniently situated right beside the canal. While there we discussed what to do about dinner tonight, as we were returning to the marina and would have the car available. In the end we decided to go to the Amington Inn which is walking distance from the next bridge, so after lunch we only moved for ten minuets and have moored for the night at Bolehall. 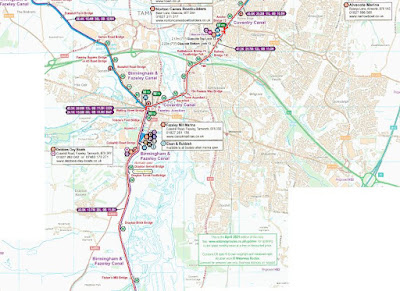