Last night was both cooler and quieter than previous nights, there was a bit more noise from the unit across the canal and then nothing until about 8am this morning, it was so much cooler that I had to get up in the early hours and close some of the doors.

When we set off at 10am this morning it was quite overcast and about 18°C but the sun was soon through and things heated up, to start with the going on the Daw End Branch was good but slowly deteriorated, the worst being just past Aldridge Wharf where it seemed very silted up. We passed these 4 ducklings, I think 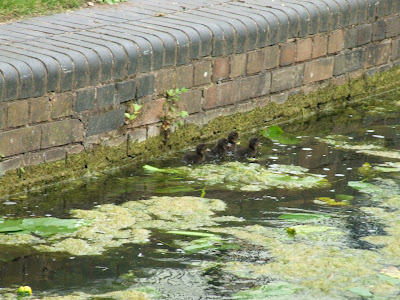 they may be Tufted Duck as the mother was very dark with white on her wings when flying. We didn't see her closely as played the injured duck trick flapping off away in front of us to draw the predator  (us) away from her young before flying back to tend them.

We have noticed a lot of gardens are now tended all the way down to the waters edge and often wondered if CRT owned a ransom strip, some have even built jetties out into the canal with seats 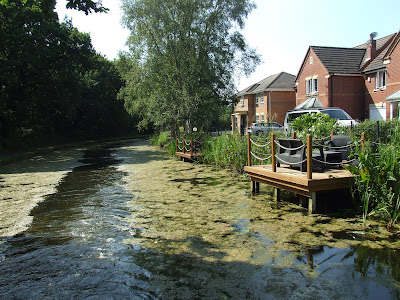 and tables on them. Well today the answer quite plain, here is a Canal Company boundary marker about 6 foot back from the waters edge. 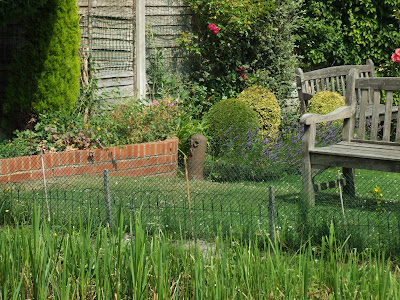 We stopped at Longwood Boat club to fill with water and also to have lunch before tackling the Rushall flight,  some locks were full and some empty with bottom gates open, one of the pounds was quite low but to our surprise we got straight down the middle. 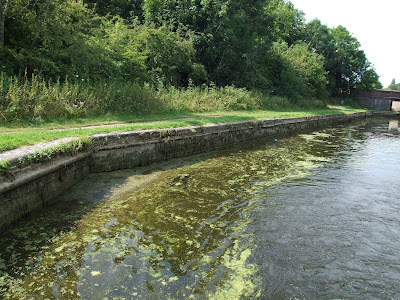 Once clear of the flight it wasn't long until we were down to Rushall Junction where we turned left on to the Tame Valley canal, going was much easier than I expected, probably something to do with the weed clearing equipment moored at the top of Perry Barr locks. 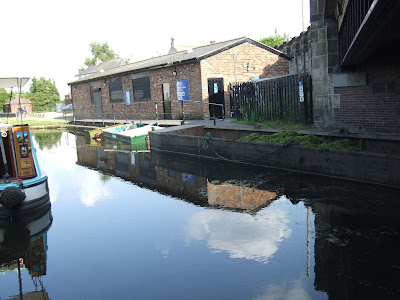 It's called the Tame Valley and it sure is a valley with some very high bridges crossing it, one is known as Chimney bridge, the reason is obvious when you look at the support tows. This bridge is undergoing  some structural maintenance with lots of scaffolding. 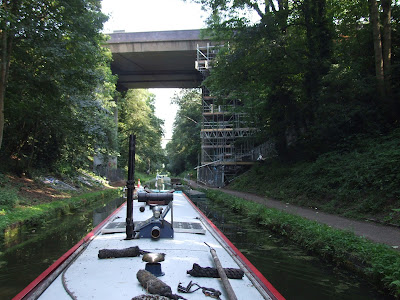 We continued on to the top of the locks where we have moored for the night, tomorrow we will tackle them and the Minworth flight. 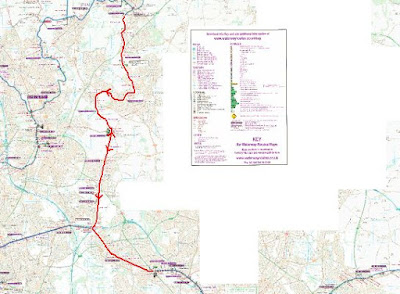