As we walked back from the Nelson yesterday evening it was looking to be a lovely night, a huge orange moon low in the sky and a few stars about, however once in bed we had a thunder storm, thankfully it was all gone this morning. As we were only a short way from the water point we tucked in there to fill the tank before winding in the marina entrance. In that short distance we 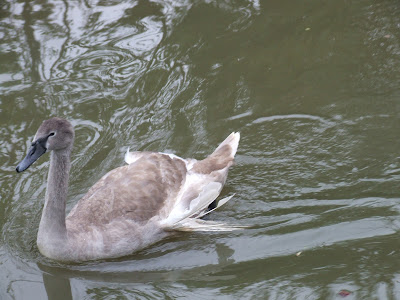 saw two signets with "Angle Wing" I have seen it in ducks and geese before but never swans.  The gongoozler rest was doing a good trade selling breakfasts with quite a queue building up. They haven't opened their onboard seating but using tables in the Stop House garden.
The North Oxford is now designated a narrow canal, it doesn't stop wide beam boats using it but they are supposed to book their journey with CRT, but they will be hard pushed to read the notice on the GU informing them of that. 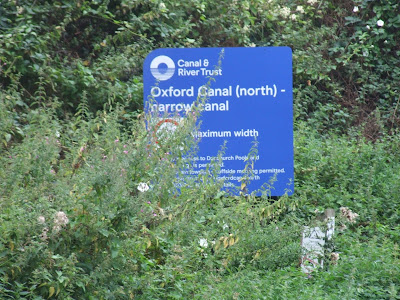 I have often tried to get this photo of Braunston steeple framed by bridge 88 but its never worked, normally its the sun in the wrong 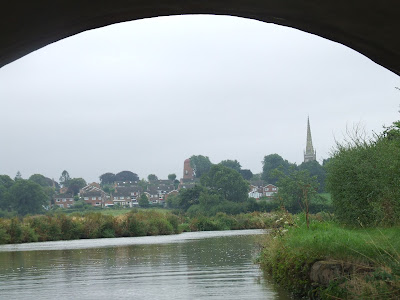 place, but this morning there was no sun to worry about. Not quite the angle I wanted but best so far.
At the remains of bridge 88 I met a 3 kamikaze canoeists all with a little flag on the back who were determined to come through the bridge hole towards me before I went through. Yes I can stop in my own length in a straight line, sometimes. The last of the three did thank me, I did wonder if they are one of these sponsored canoe groups doing a charity run.
The canal was quite busy and I estimate we met one boat every quarter of a mile between Braunston and Hillmorton locks, we only caught up with a boat just before Barby Straight and thankfully they winded at the next winding hole. There were two Volockies on the Hillmorton flight, one at the top and one at the bottom, when you would like to meet a few boats there are none around but as soon as we cleared the bottom lock loads turned up. We carried on to moor on the outskirts of Rugby at the furthest point from the railway line. 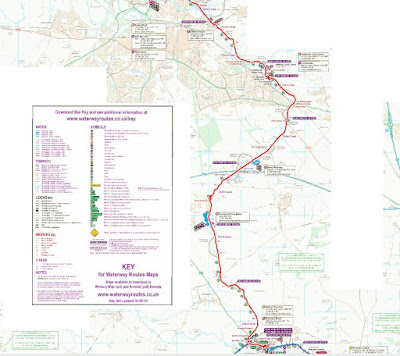