Yesterday evening we were sitting nice and cosy in the lounge, outside it was dark and raining, suddenly “Bang” and the boat rocked. I though someone had come along side in the dark, but no, he just hit me up the bum trying to moor behind us. Anyway we put on coats and boots and  moved Harnser forward to give him more room. They had stopped for lunch and forgotten that it would get dark an hour earlier.

This morning our new neighbour went to see Paul the lock keeper and came back to inform us that the lock keeper at Denver doesn’t start until 9 am in October, but as they had dredged the channel leading straight to the lock we were to go down and wait on the pontoon. I have never been able to get near the pontoon before so that would be a first. After I had finished taking the poly off the prop I walked down to see Paul and he told me the same thing except the tide was running out and we should get a move on.
Harnser’s engine was already running so it didn’t take us many 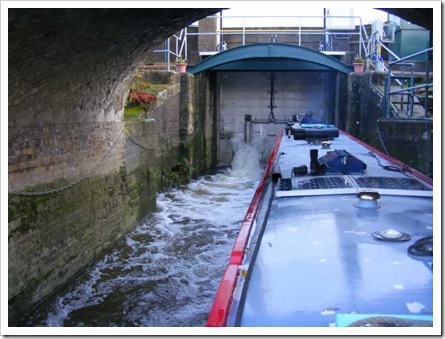 minutes to get into the lock, by quarter past 8 we were out onto the Great Ouse and slowly making the 110° turn upstream against 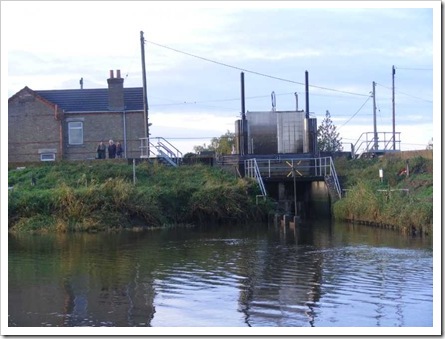 the ebbing tide. The water level only looked to be about 2 foot higher than when I looked at low tide, this is due to the fresh coming down the New Bedford from Erith

It wasn’t long before we were approaching the Denver Sluice lock landing. 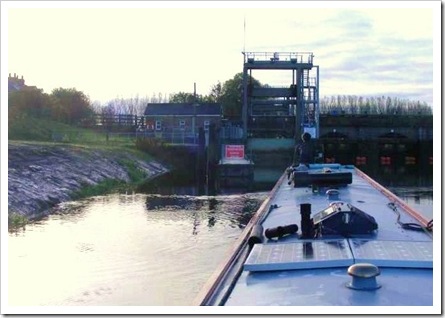 This is a floating pontoon inline with the mouth of the lock. Because the whole complex opens out like a funnel onto the river as the tide flows out it sweeps round in a large circle, so as you approach the landing stage you now have the flow coming from behind you, considering up till now you had been pushing against the stream it makes stopping interesting. For this reason I waited at the end of the pontoon to take a rope from the boat 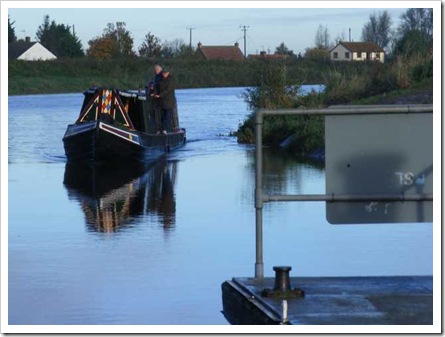 following so as not to get another smack up the bum, and its a good job I did. We were at the lock before half 8, Dan the lock keeper arrived a few minutes to 9 and as soon as the gate was up we were on our way in 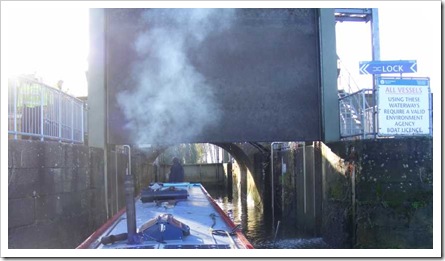 The next stop was Hilgay bridge where we stopped to fill with water. While we were there I rang the river manager at the Cam Conservancy to tell her that we were planning to go above Jesus Lock on Wednesday morning, she has since emailed my with extra information for our journey.
At  Littleport I saw two ladies waving madly surrounded by dogs, it was Leslie and Jill, but there was no sign of Graham and Joe, wise chaps. There were a lot of Black Headed Gulls about, but at this time of the year their heads are not black, 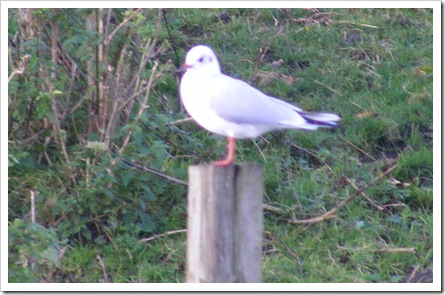 just a spot behind the eye, there heads only turn black in the spring time.
We continued on our way, The marina at Ely was busy lifting boats out and I expect this one was on its way to a new home 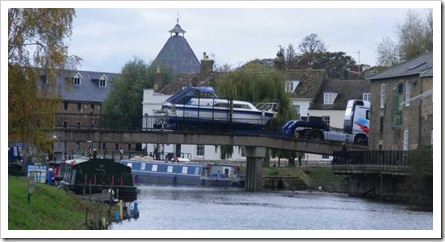 somewhere. Just after this we passed our neighbours of last night, he was hoping to get his stern gland repacked as it was leaking badly.
We continued on to Popes Corner where we joined the River Cam 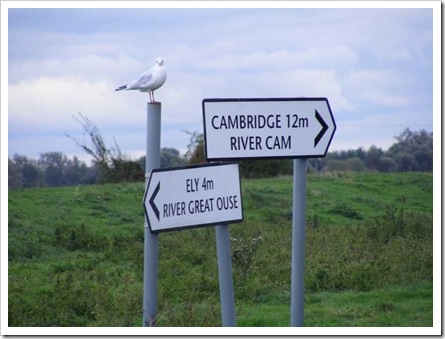 and headed to where we planned to moor for the night, the EA 48hr. moorings at Upware. We hadn’t been moored long when James on Lucky Duck came by, we noticed her moored in Ely as we came through.

Looking forwards to seeing you in town.

Looking forwards to seeing you in town.

We did think you were trying to avoid us Brian

I was trying to photograph that gull sitting on a post and nearly came to see you on the bank.

We will be in Cambridge in the morning / afternoon Tuesday as well. We mush have passed you earlier but I was down stairs cooking and wasn't on look out.

We are at Clayhithe this evening.

Hope to see you.