We had a bit of rain over night but woke to a bright but cool morning. As we returned from collecting the Chinese takeaway night last there was a chap by the foot bridge trying to set fire, with the aid of half a gallon of petrol to a large pile of brush cuttings from the trees that had been cut down. We could see this morning that he was not very successful. 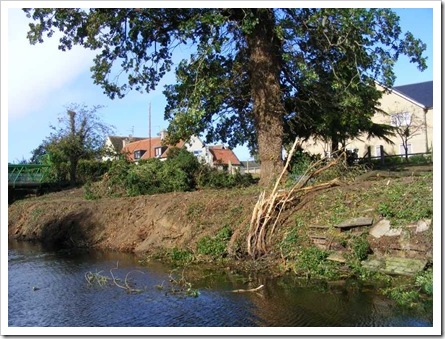 After breakfast we walked up to the town museum. My mum was born in March and lived here for the first few years of her life so anything of interest that we have found about March we have taken to them. This time it was a postcard that I received from March in 1967 and another dated 1914 that had my Grandfather in it. It was very none PC as he was fully blacked up like one of the Black and White Minstrels at a flower show in March. The third thing was a March newspaper from 1899. The interesting thing was that it was broad sheet and only 4 sides, but unlike modern papers where the sheets are folded down the side this was folded across the top.

Back on the boat we pushed off at 1150 am heading to Outwell just as it started to rain. The town Council has installed a new pumpout station on the end of the old service moorings. I didn’t stop to read the notice but I will find all the details for using it on our return.

As we passed the wind farm the skies got darker but it wasn't actually raining, however that didn’t last long and we were soon 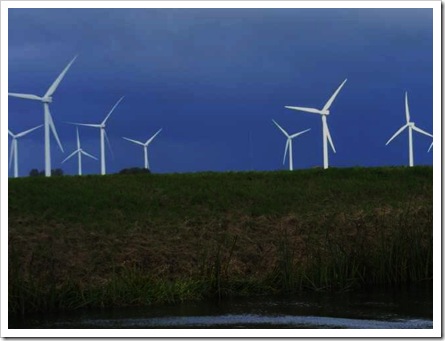 getting very fine sleet which was followed by rain, not the nicest mixture to be driving a boat in. It was here that I rang Maureen at Marmont Priory lock to tell her we would be there in about an hour and it was the most miserable hours boating I have done for a long time. When we arrived at the lock it had just stopped raining, Diana went up to help set the lock while I put something a bit warmer on. She soon came back to say we had to wait for a boat coming down that would arrive soon so we went back inside for a bit of a warm up. The other boat was about 20 minutes and when it arrived Maureen and her son worked them down, Diana working the gates on our side of the lock. As soon as they were clear we were on our way again and soon rising up in the lock. 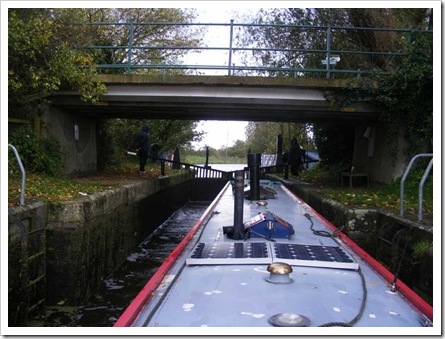 It was a case of removing both the stove chimney and the exhaust to get under the bridge that crosses the lock, but we would need them off for the rest of the bridges on Well Creak anyway as the clearances are much lower than below the lock. We made our way through Upwell and Outwell to moor for the night at The Crown Lodge Hotel. Once moored up I crossed the road and went to book a table, this brought a sharp intake of breath from the chap I spoke to, after consulting the booking diary the best he could offer was 8-30 for 9 PM so I will probably be very hungry and then suffer indigestion.