For some reason we were ready to go at 9-20 this morning and it had just stopped drizzling. We made our way round to the Buckby Flight to find one bottom gate open, there had been a hire boat go through earlier.As we approached the lock the CaRT gent on a bike informed us that there was a boat coming up, so not too bad, but it got better, it was a working boat selling diesel and coal. After locking her up we were on our way down. Diana decided she wanted to drive so I was locking, as expected the second lock was full with the top gates open, I was expecting one but not both. At the next lock it was one top gate open but after that she must have crossed the boat going down. Due to the way the by-washes are arranged on this flight, they spill into the top of the next lock as you go down, so filling the lock ahead. This was the case until one from the bottom that leaks like a sieve and was only half full, but I could see that the bottom gate was open on the bottom lock. Walking down to turn the bottom lock I found it wasn’t empty but contained a CaRT team 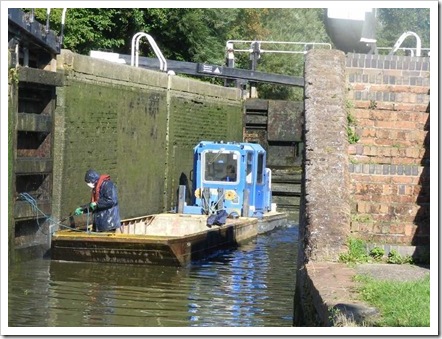 cleaning the gates. The asked if I would mind waiting half an hour until they finished, no problem. Once they were out of the lock there was a hire boat approaching in the distance so we also waited for them, in all it took us an hour to do that last lock, more than it had taken for the rest of the flight. The chaps working in the lock had their trucks parked by the marina, one was supporting BW livery and the other

Just after we left the lock two boats decided to pull away from just passed the lock moorings, by this time I had passed the stern of the second one but she continued on her way with me traveling beside her almost to the next bridge where I finally pulled ahead.
I was pleased to see that the topiary just before High House Wharf has been trimmed, it was a bit forlorn 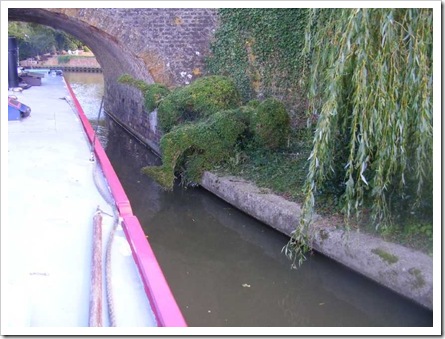 last time we passed and I thought it may have been abandoned. We stopped at Stow Hill to top up with diesel at 89p/lt unfortunately we emptied his tank before we were full so had to stop at Fred Tarry’s for another 66 lts at 88p/lt. We passed a rather nice pair, not old but looking good a short way before Gayton, I have met the owner somewhere but I can’t think where.
There is a lot of excavation work going on just before Gayton Junction on the off side and a compound right down beside the canal, for some reason they have put a rabbit proof fence round the compound. As we turned into the Northampton arm two Canalclub boats were just coming out to start their holidays. Gayton Marina has a rather fine specimen 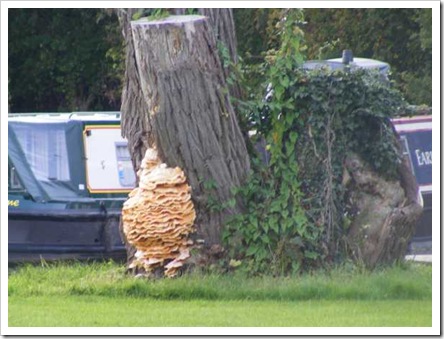 of a tree fungi  growing on one of their trees. As usual their crane was poised for business ant they were busy showing two more lots 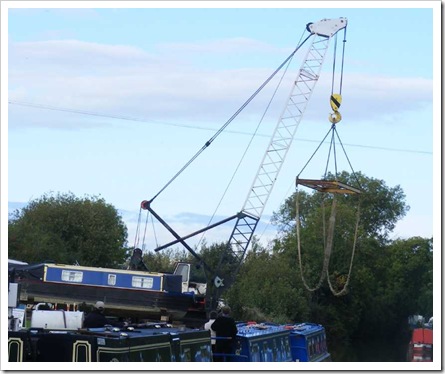 of hires the ins and outs of a couple of Canalclub boats. They also have a rather interesting inspection launch chocked up 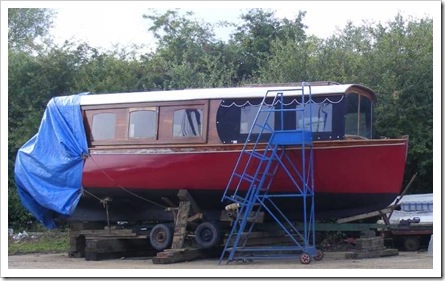 on its trailer for some reason. We continued on down the arm, hoping to see someone who could give us up-to-date information as to when the arm would actually open. On the way we passed a boat that is also waiting  to go down destine for the Gt Ouse, he has been here a week, so I made it clear that I was not queue jumping, even though we have moor by the top lock. In the winding hole a gent was testing his model yacht, he was 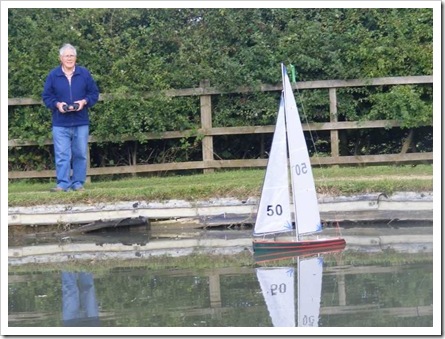 doing it up and last time he tried it it was taking on water badly via the keel. His test sail proved successful and he was happy just sending it round in the light breeze, but his enjoyment was cut short when the two Canalclub boats came down one after the other to wind and get on their way, at this point he went home.
When we arrived at 4-15 the lock had half a paddle drawn at each end, the chap with the yacht said that when he arrived the canal was dry below the locks, around half five the CaRT chap arrived to close the paddles, he said the arm was about three quarters full and that he would finish the job in the morning, he also told me that the contractors still had about a mile of fencing to remove before the canal could be opened but hopefully they would be done about 3 pm. so we should be able to at least get on our way down tomorrow.