Last night was OK. The fair was not open, the boat wasn’t set adrift. covered in paint, stuff nicked off the roof or any of the other horror stories I had heard about The Embankment. The road quietened down a bit and there weren’t many trains. There were a lot of geese early in the morning.

The weather was much cooler than of late and very overcast, we said goodbye to Lunar Dream and Tugby as that had managed to bring their bookings for Stanground forward. We had a booking for mid day so decided to spend the morning looking round the Cathedral, we didn’t allow anywhere near enough time and will need to go again.
11-30 and we were back on the boat ready to go, a gentle run down to Stanground lock, the railway bridge over the course of the old river leading to the lock has received a new 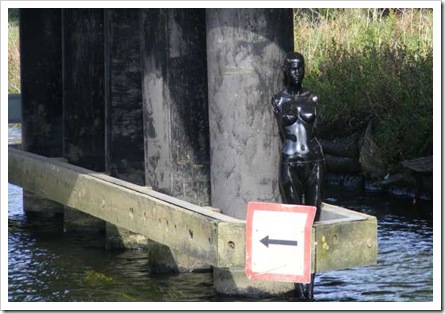 adornment. At Stanground we had a short wait for Tina to turn the lock and see us through, it was spot on 12 o’clock when we left the lock heading down Kings Dyke. We didn’t see any boats on the move but there were a few fishermen around Whittlesey and a topiary 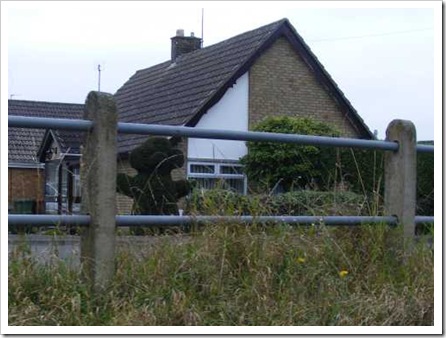 bear waving to us from a garden.

Ashline lock was of course against us as not only had two boats been down ahead of us but which ever way you go you are instructed to leave it empty and open. It seemed to take ages to fill. A short way after the lock we passed Straw Bear, the boat we were traveling with a couple of days ago on the home moorings. As we headed east the weather deteriorated with some light drizzle. Not far from our moorings we found bank to bank floating fairy moss 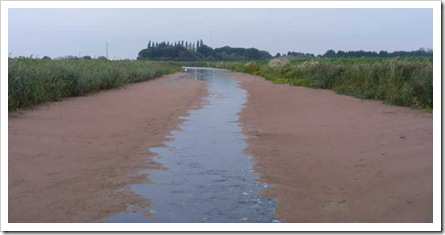 but it didn’t cause us any problems. It was just on 4 pm. when we tied up safely back in our berth. By the time we were ready to leave it was raining steadily and this got worse as we got home.

I am sorry this posting is so late, but we have a problem at home. The local farmer while flailing the hedges decided to flail the main multicore telephone overhead cable running to the village, this has resulted in half the village not having any telephones or broadband, what’s more they are going to take 2 weeks to fix it. I have discovered than by fixing my 3 Mifi against the bedroom window I am able to get a flaky 3G signal, hence just posting this.

These are impressive articles. Keep up the sunny handiwork.

Thanks a lot for being the lecturer on this area. We enjoyed your own article quite definitely and most of all cherished how you handled the issues I widely known as controversial. You happen to be always quite kind towards readers much like me and help me in my lifestyle. Thank you.

Hello there, I found your blog via Google at the same time as looking for a related topic, your website came up, it appears great. I've bookmarked it in my google bookmarks.