I would like to have said we were woken by the rain this morning, but actually we were woken every time a sugarbeet lorry went passed and also when a lot of the cars went speeding by. We are moored just 12 feet from the side of the A1122 and although its a 30 MPH area not everyone realises that. 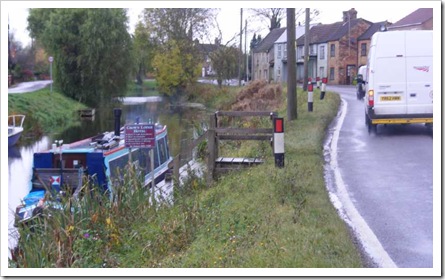 When I say moored we have ropes attached but we are sitting in the mud and laying in bed you could feel the big lorries going by. Just after we were up this morning we heard voices outside and two canoes had just gone by. After calling in at The Crown to tell them that one of their signs had fallen/been pulled down on the moorings we made ready to set off, of course by now it was raining again.

We departed at 1030 am and very conveniently it stopped raining.  We had a steady run to Salters Lode only getting a couple of blade fulls of weed on the way, much better than last time. We arrived at Salters about mid day. The reason for our slow journey and also our noisy mooring was that Monday is the first usable tide to cross to Denver, its been like that since Thursday. Once moored up I walked to the lock and took a look at the river. 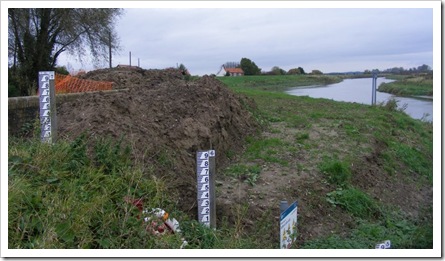 It looks as if the EA has dredged the riverside entrance to the lock from the amount of mud on the bank. We will find out in the morning.