Although yesterday evening was fine with the moon out over night it rained very hard. This morning was fine and we set off at 0945hr heading south. There must be more wild apple trees along this canal than any other in the area, in places the towing path was thick with them. 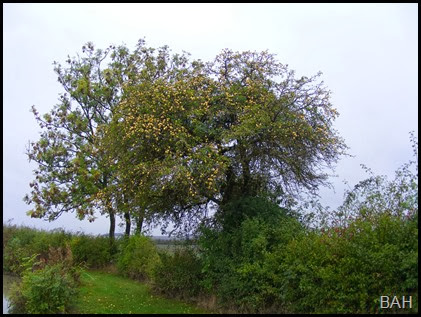 It was not long before the dreaded Wormleighton mast came into view, moving around the country side but never seeming to be any closer or further away, it haunted us all the way to Fenny Compton. 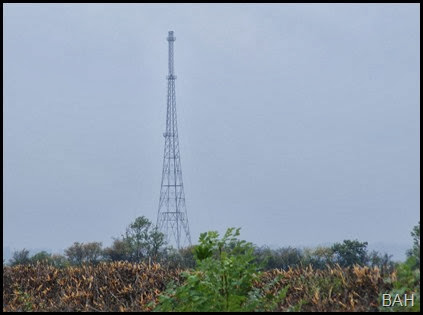 Diana decided that we could use a few more blackberries to go with the large apples she had found yesterday, so spotting a large clump of them I put her ashore when I found a gap in the jungle that runs along the side of the towing path. 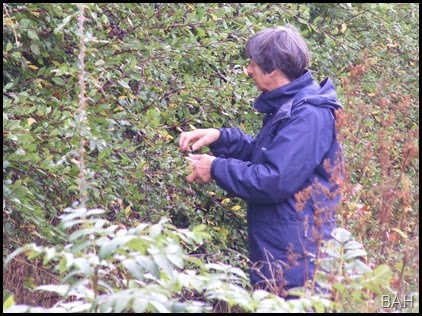 At Fenny Compton the first thing that struck me was that the long term moorings to the north of the village were almost empty, only one boat in residence. Where the rest out cruising or are CaRT failing to let these moorings and raise important cash for the charity? 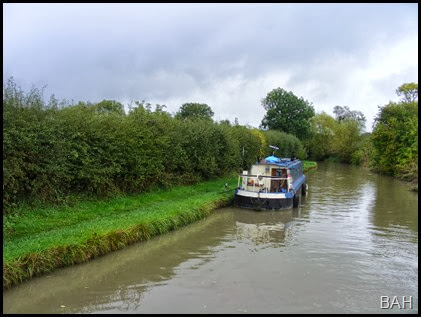 There were several boats on the 14 day and 48hr moorings closer to the pub.
We met a boat just before Fenny tunnel but nothing while passing through. 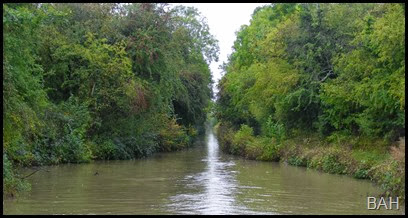 For those that don’t know Fenny use to have 2 tunnels but the roofs were removed many years ago leaving a straight narrow channel. But now it had started to drizzle which on and off turned to rain with odd bouts of very heavy rain, normally while working locks. We were quite lucky on the Claydon flight meeting several boats so not having to close too many gates.

It wasn’t long before we were at the new Cropredy Marina  with the large basin fully occupied and water flowing into the smaller one by a large pipe that looks as if it connects the two basins. 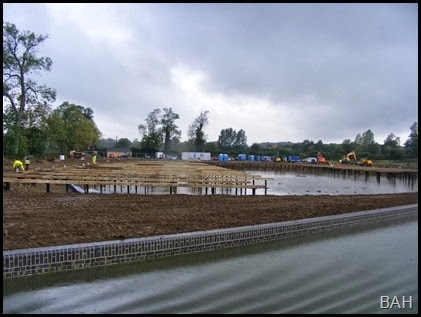 Lots of boats in the open basin

As we passed the marina entrance we were surprised by the number of boats moored on the towing path, they normally only get all the way back here before the old bridge hole in the summer months. CaRT have a few work boats below the lock and a BIG pile of safety fence on the wharf ready for the winter lock closure. They also had a pile of stop planks up by Broadmoor Lock which I haven’t seen on the list. Once through Cropredy there were hardly any boats moored beyond the bridge at the end of the long term moorings, this use to be packed.

We continued meeting boats at most locks and it continued to rain. As we came into Banbury the foundations of the old lift bridge, long replaced by a foot bridge by the Spiceball moorings look in a very poor shape, I know its not carrying a bridge now but we all know where the bricks etc are going. 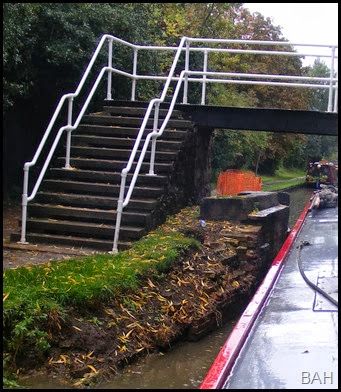 We continued into town looking for a spot to moor, would it be under the road bridge or under the foot bridge? then we saw n.b. Derwent 6 moored up and they informed us there was a spot further down towards Tooley’s which is where we moored at about 5pm in the rain.