Last night dinner at The Boat went down very well, probably the best beef chilly I have ever had out. It tasted like chilly not mince. The sky was bright with lightening and we had a very heavy rain storm, thankfully we were in the pub at the time.

This morning we pushed off at about 10 30 heading north, we passed a boat on the mooring ahead and I am not sure how the steerer can see where they are going as the flowers must be at least 2ft. higher than the boat, maybe the owl tells them which way to go. 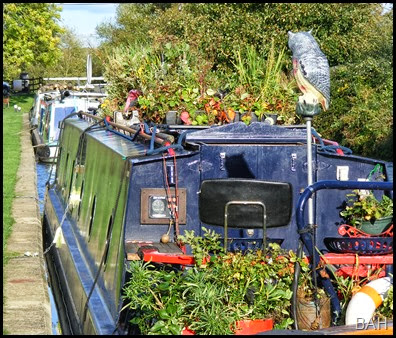 Next to come into view was what looked like a chimney being swept, but on closer inspection is a dummy brush on a blank stub of pipe. 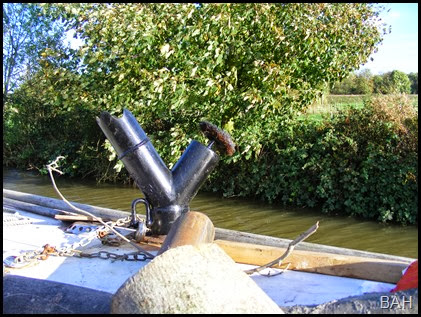 Once through the electric lift bridge we pulled over and filled with water at the Thrupp Cruising Club service block. I must say that the club do keep the area looking very smart with all their planters and flowering tubs around the place.

When the tank was full we set off to Shipton Weir, at this point we checked the level of the river Cherwell, the indicator showed just into the yellow so not a problem. With this information  we decided to lock out on to the river, turn round and head back south. if it had have been higher we would have continued north up the river before things got worse. I have since found out that I could have checked the level on the EA web site HERE.

The old cement works stood out nicely in the sun against the dark clouds. 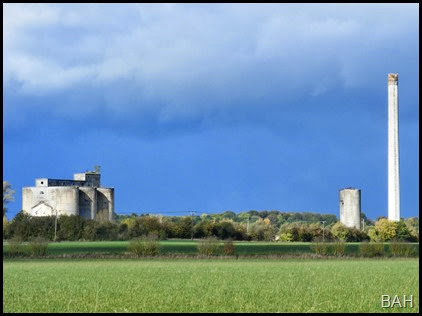 Back in Thrupp I winded just before the electric lift bridge and reversed through the bridge to the visitor moorings, not the same one as we were on last night but 2 boat lengths to the north.

So it has taken us 2 hours to move 50 yard and fill the tank with water. that included passing 2 lift bridges twice, locking down once, up once and turning round twice. Still its better than sitting with the engine idling to charge the batteries.