Last night after a bit of chatting to old friends we met up with Bones and Alex in The Boat for a couple of pints and a good laugh. It did my back the world of good but it didn’t last.

This morning we woke to a sunny day but we were very slow getting away. First I had to get moving and then we wandered down to the Thrupp Cruising Club for Diana to pick up a couple of books. After that it was over to Annie's Tea room for a cupper with Ms.Bones and Mr Jones. (that has a nice ring to it)
We finally pushed off at about midday.

Just going under the road bridge as we left Thrupp there was a boat on the Langford Lane water point, this is quite close to the bridge on a left hand bend just prior to a long line of long term moorings, so I was well over to the wrong side to get round her bow. Needless to say there was a boat coming the other way, but we sorted it.

You may remember that on the 15th I published a photo of Brush Wood at CaRT’s Nell Bridge yard, well here is some installed.

We were very lucky meeting boats at all the locks, in some cases 2, one leaving so sailing straight in and another arriving as we left so gates left open.

There use to be  a boat yard at Kings Bridge which I think was originally at Jericho in Oxford until BW as it was then decided to unsuccessfully redevelop the site. The site is now empty and the boatyard gone. 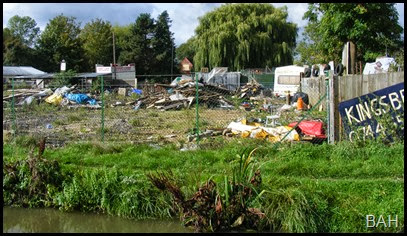 There has been lots of discussion about CaRT  changing the cast iron water points for stainless steel ones. This is the second of the new type that I have seen wide open and no lock. 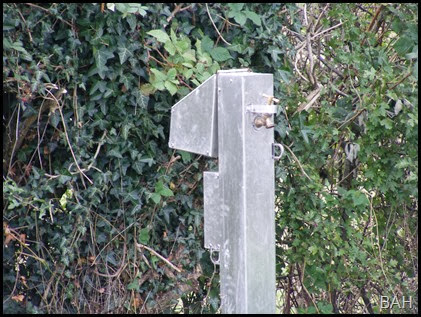 I do wonder how much this is costing us for CaRT to carry out this, what a lot of people, myself included is unnecessary work.

Several years ago I contacted the then BW about the state of the lock moorings at Dukes Cut lock and received what I thought was a positive reply as there is some doubt to the ownership. Again the lock moorings are badly overgrown and the second mooring bollard is completely hidden in the undergrowth.

Dukes Cut was interesting, there are now approximately 10 boats moored down there, some displaying licenses and some not. The first one we came to was moored just through the road bridge so to get round him you have to boat through the off side bushes and trees. If he had been just 5 mt. further along it would have made life so much easier.

We met two Narrowboats before we were out onto the Thames proper and then nothing. Once out of Dukes Cut we headed upstream through Eynsham Lock.

On the way we passed the entrance to the River Evenlode which is somewhat overgrown. I don’t think I would have even spotted it if it hadn’t been for the very faded sign.

Not far from here there were trees and branches well out into the river, maybe the Environment Agency thought it was all going to CaRT and decided not to spend their money.

We saw quite an assortment of geese on the fields beside the river but I have never seen these here before.

As we approached Aynsham Lock the Self Service signs were up, something I didn’t need today with the way my back is feeling, however just as we slid into the lock two gentlemen arrived, one popped in and out of the office and then worked us through the lock.
We moored just above the lock on the 24 hr moorings near the water point at 3-15 pm. We have already had one boat asked if we were staying overnight, we offered them the opportunity to breast up, but they declined.