Last night was very quiet, the only problem was the light streaming through the bulls eye above the bed, it was if someone was shining a torch in my face all night. We don’t have a shutter on the inside and once in bed with the lights off I was not inclined to go out and cover it up.

We set off this morning about half ten, Diana walked down to the lift bridge and had it open ready for me. The plan was for me to go below the locks and fill with water while Diana got some shopping in. There was a boat coming up the locks so it all looked fine until a lady who had the drop on me, because she knew me but I didn’t know her came up and told me they had two boats on the water point with empty tanks and suggested I used the water point above the lock, good move. I tied up and ran out the hose only to find that it didn’t have the threaded bit to put my hose connector on. Still we are not desperate so we will fill up later. As we passed Tooley’s yard it looks as if they now have an observatory out side, I would have thought there would have

been far to much light pollution for that to have been of any real use.

We dropped down and moored opposite the iron foundry so that 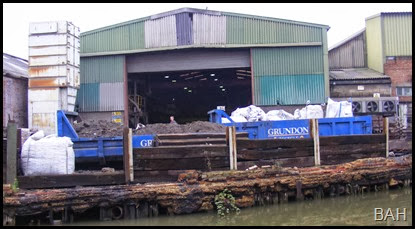 Diana could get a few odds and ends from Morrisons which is just over the bridge from here.

Once we were on our way again it was not long until the weather started to improve and the rest of the day we cruised in sunshine.

Just passed Twyford Wharf I spotted this cruiser moored against the towing path, I had not considered that a Crook lock could be used to protect a boat. The lock cottage at Kings Sutton Lock is up for sale, it must be one of the better ones as it has electricity and road access. 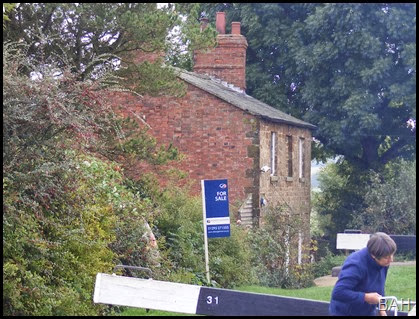 As we approached Nells Bridge I noticed that there are still No Fishing signs on the towing path opposite. I wonder if the owner that negotiated that with British Waterways is still in residence?

The CaRT yard at Nells Bridge has a good stock of brush wood which I see they are using in places in place of piling topped of with the fibre sausage. 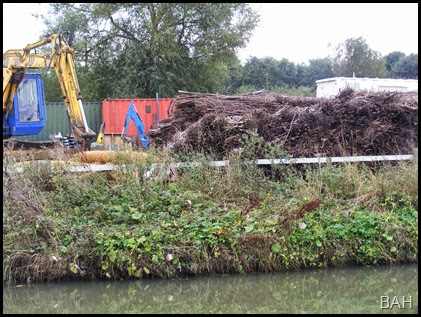 There is a big notice at Nell’s Bridge lock telly boaters about the high river flow warning system as the river flows through the canal just before the next lock, it says the indicator is below bridge 187 but I have never been able to find it, does anyone know where it is?
Today the level looked quite low, I was expecting a bit more water following the heavy rains we have had. The water flows so freely through the top gate of the lock it was almost level by the time Diana had reached it and I didn’t need to stop before entering. For those that don’t know the river enters from the left 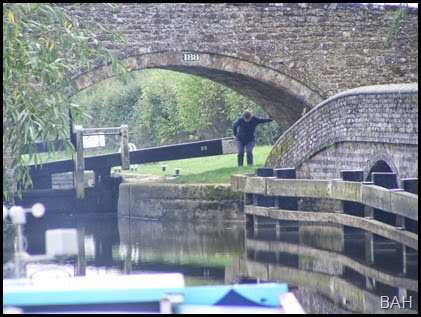 passes joining the canal and then flows off to the right through the wooden bridge protection and then under the bridge. The towing path runs over the bridge.

CaRT have put a very nice notice on Somerton Deep Lock bottom gate asking boaters to take care and that the gate will be replaced next month. It was here that a stowaway joined us and stayed until Heyford Common Lock, I didn’t notice him land on my sleeve but he seemed very happy there. 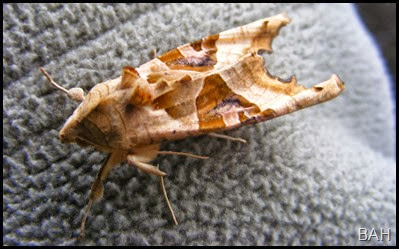 We continued to Allens lock passing a young boy having his first paddle in a canoe and feeling very proud he didn’t fall in. The funny thing was he seemed just as excited to help Diana with the lock gates while his big sister went out in the canoe. There is a CaRT work boat moored just below the Allens Lock moorings and there was just enough room for us to squeeze in between it and the last mooring post.

Its been a cracking day especially when you compare it to yesterday and at 5pm the temperature was 15°C in bright sunshine.

I had just finished writing this at about 6pm I couldn’t send it as I have no network at all. I went outside to refit the chimney, I forgot after coming through the bridge below Allens to find the marsh land covered in a layer of mist. 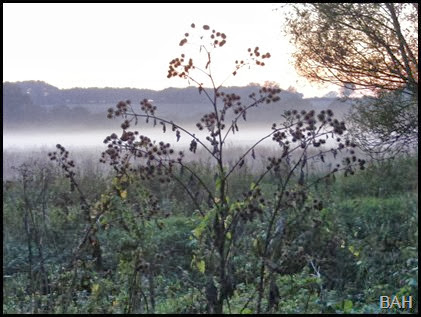 I wonder how much it cost to build?