Last night dinner was take at The Talbot, Eynsham. A short walk over the privately owned Swinford Toll bridge, which 4 years ago was sold for over a million pounds. Luckily pedestrians can cross free but for cars its 5p a time which gives an income of about £200,000 per year.

The Talbot is an unusual pub in so much that it doesn’t have any beer engines (pumps). The kegs are all racked up behind the bar and the beer is drawn straight into your glass.

This morning a boat came by to use the water point behind us, other than that its the only moving boat that has passed us. Its a lovely 24 hr mooring just above the lock and below the bridge. 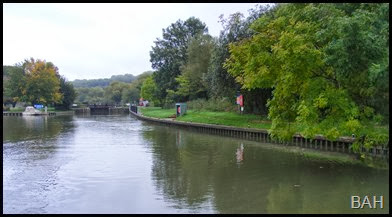 Once about we walked down to the lock to dump a bag of rubbish. The local Fire Brigade were at the lock doing some water rescue practice with an inflatable walkway and dingy. We pushed of at 11am making our way upstream. I remembered the shallows just above the bridge as extending further out into the river, may be they dredged it. The next one we came to they hadn’t and there was hardly enough room to get a wide beam boat between the bank and the buoy.

You have to pass to the right of it as you see it in this photo.

Just before Oxford Cruisers yard where there were 13 Anglo Welch Narrowboats moored we passed this rather charming wooden cruiser. 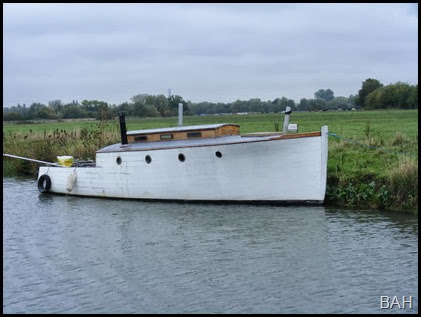 We arrived at Pinkhill lock to find it manned which was great, the lock keeper opened the gates as soon as he saw us, we were the only boat around. He closed the gates and as he walked past asked if I would please turn the awful noise off. As I didn’t have the radio on I assumed he meant our engine, he then made a comment to Di about being gassed by the fumes. Still he was having a busy day.

Bablock Hythe use to have a ferry crossing the river, unfortunately its been resting on the bank for some years now, so I don’t expect it will ever go back into service. 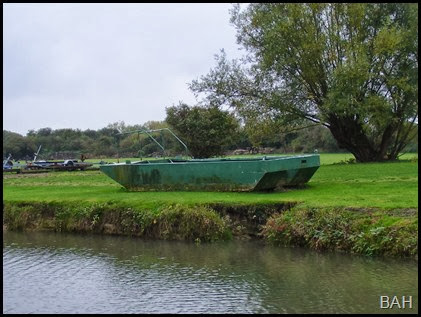 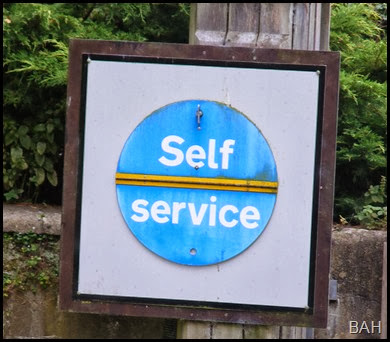 I met the lock keeper, he had just turned the signs an was about to leave, but kindly worked us through before he went. No such luck at Shifford lock where we did have to work it ourselves. Beside the lock set back into the hedge there is an insect hotel. 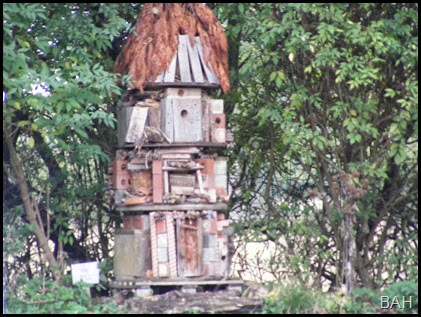 can’t stand up in a boat and handle a pole. They also had some other brightly coloured punts with a small steering wheel,which are electrically propelled.

Our destination for the night was The Trout at Tadpole Bridge, they have a very good mooring along the bottom of their garden and usually serve very good food, not cheap but a treat when we are this way. When we arrived at 3-30pm their landing stage was completely vacant so here we are waiting for dinner.

We love the Pinkhill lock keeper. He's consistently delightfully rude, which we find extremely funny. Though I went through there once, and he was actually in a good mood. Incredible! Hope you're having a good time. *waves*

I have to say, that I love the looks of that old wooden cruiser. My, I'll bet if it could talk it would have some tales to tell :)
Have a wonderful weekend,
Your blogging sister, Connie :)