We set off after quite a disturbed nights sleep at about 10-15am on a sunny morning.

At Somerton Deep lock I got a photograph of the notice on the bottom gate beam. The German Shepherd that lives at the lock cottage kept a good eye on us. 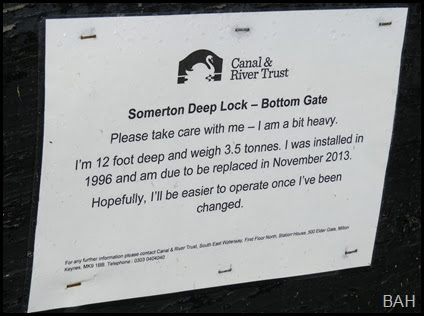 A little further on and CaRT are repairing the towing path, you can see how deep the water is by how close they managed to moor their boat. 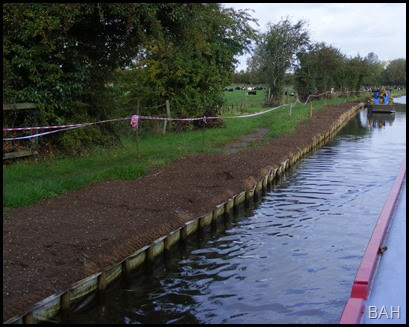 When we passed through Aynho last week I spotted what looks like a steam powered Narrowboat on the hard, right by the bridge.

Passing under the motorway bridge No.182A there is a memorial plaque to Paul Hill who was killed during the construction of the bridge 25 years ago. 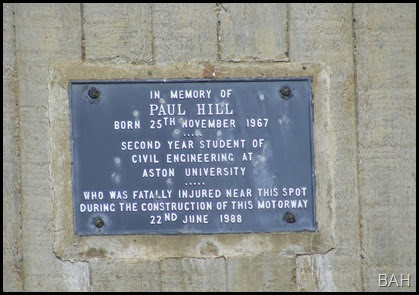 Just north of the motorway there is a Wilderness trail boat,  its been in this area for several years now and it looks as if it is someone’s home. 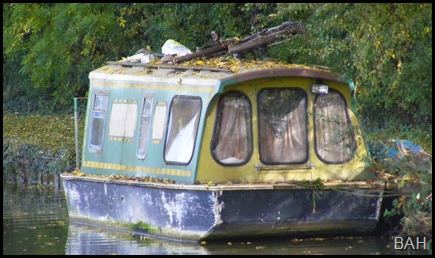 Between the two lift bridges to the south of Banbury there is work going on both sides of the canal, on the non towing path side they are digging a deep hole inside a coffer dam, there are also diggers working in the field on the other side. 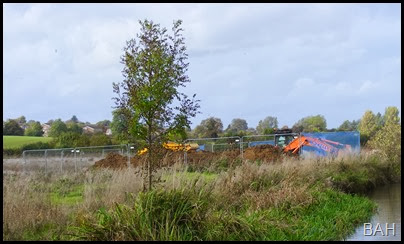 To get the plant across the canal they look to have used a Bailey Bridge so I suspect it was to large to get through the lift bridge.

The lift bridge was down to give them access between sites and luckily for us one of the workmen walked down and opened it, Diana wouldn’t have managed and its debatable if we could have done it between us. The chap stood on top of the stump post that the arm of the bridge rests on when open and then swung on the chain for several seconds before his body weight started to lift the platform and he came back down to earth, he was much bigger than ether me or Diana.

We stopped briefly in Banbury to fill with water and then continued north mooring for the night just above Slat Mill Lock, this is as bout as far as we can get from the railway but there is still the constant buzz of the motorway.

Keep a look out for Timothy West and Prunella Scales who came through Cropredy today, their boat is blue I think with red trim, no cratch canopy..