We departed our old moorings at Little Ouse moorings at Brandon creek on 27 August 2013 and arrived at out new moorings at Napton on the 30 September.

In that time the boat engine ran for 195 hours of which only 5 where for battery charging while moored. There were only 3 days when we didn’t move at all. The journey was around 370 miles long passing through 227 locks and 11 tunnels.

After leaving the Little Ouse we passed through Denver Sluice and on to the Middle Level via Salter’s lode. Through March and down to Benwick, from here we continued on the Old Course of the River Nene down through Lodesend Lock as far as Exhibition Bridge, the limit of Navigation for Harnser. We spent a couple of hours in the inflatable canoe passing under the bridge and as far as Bevill’s Leam Pumping Station. The Middle Level Commissionaires have a good way with indicating the head room under a bridge. The bridge slopes from one side of the road to the other and the MLC have measured from the water to the underside of the bridge giving different measurements each side. 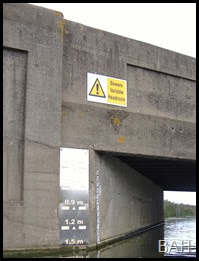 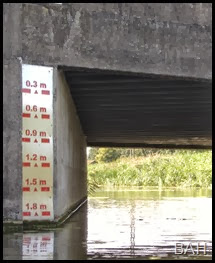 So from one side the bridge clearance is 1.6m and from the other 1.9m I am just glad it sloped the way it did or I would have tried to get under it with Harnser.

From here we headed back to the main route towards Stanground lock and on to the River Nene, this is where we saw 2 deer.

On the Nene we had bit of a wasted journey heading down to the Dog in a Doublet for a meal only to find the moorings closed. Other than that it was an uneventful and pleasant cruise up to the Northampton arm. Entering CaRT waters again it was nice to see the landing area round the bottom lock cleared up. I late found out that this was due to the Northampton IWA and not CaRT.

The weed up the Northampton arm was not as bad as in the past but I later found out I was accused of draining one of the pounds by leaving a paddle up. The the top of the flight we turned left and spent a night in Stoke Bruerne before turning round and heading north along the GU. While heading up the Buckby flight we decided that at Norton Junction to go straight ahead and up the Watford Flight to the top of the Foxton Flight. At this point we changed plan again and turned round for a trip up the Welford Arm and then back to Napton Engine Arm to sort out a mooring for Harnser. We were held up coming down the Watford for half a day because CaRT were pressure washing the gates down. When they finished there were 12 boats coming up and 9 going down ahead of us and we helped to lock most of them.

Following Napton it was the Blue Lias for the CIBC rally for the weekend. Then another decision, home for the Henham Steam Rally or off to the rally at Huddlesford Junction. Huddlesford won so off back to Braunston Junction, North Oxford and Coventry canal for the weekend at Huddlesford junction. We decided to return after the weekend via Birmingham and the Grand Union down the Knowle flight. We hadn’t been down Knowle for some time and I don’t think I will be repeating it soon.

We spent a night in Braunston before taking a short trip to Hillmorton on a sunny Sunday before heading up the Napton flight to take up or mooring on the Engine Arm.

This is NOT us finished boating for the year, we will be out there again soon so watch this space.