We had a bit of rain overnight but it was dry when we got up this morning, so we decided to set off a bit early ahead of the forecast bad weather. The plan was to go down to Nell’s Bridge, turn round and come back to Banbury for the night. As usual with our plans, they changed.

We pushed off at 9.30 to a chilly but dry and overcast morning. The flood water on the offside was trickling into the canal. You can see the security fencing from the work that has been going on standing in the water. This is between lift bridges 170 and 171

The good weather didn’t stay with us and by the time we reached Grants Lock it had started to rain, not hard but slowly getting worse. Grants Lock is the first of the locks going down the South Oxford that have a single gate at each end of the lock, that meant there was no gate for me to open or paddle to close, so I could get back on the boat and not climb down the ladder.

Just below Grants Lock there is a sunk cruiser moored to the lock landing, there is also something hard under the water that I went over some way out from it.

Stevens Lift Bridge No.175 was open but as I looked closer I could see it wasn’t fully open but balanced part way.

This meant that Diana couldn’t cross it to open it full and I couldn’t get under it, so I put the bows against the offside parapet wall and she scrambled ashore from there to open it full.

As I said the plan was to go down to Nell’s Bridge to wind, but as we passed Twyford Wharf I noticed a 60 foot winding hole and now the rain was heavier and the wind fresher we decided to turn there and head back to Banbury.

We had just entered Grants Lock for the second time, this time going up, I noticed that the bridge over the tail of the lock actually has two numbers on it, 174 the number it is known by today and 148. 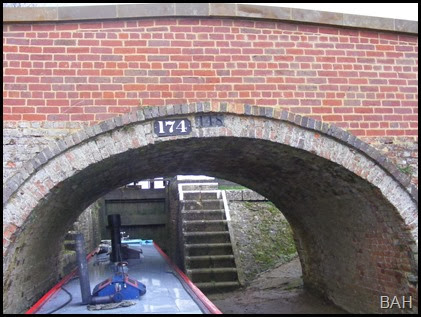 We had just got into the lock and the sky opened with rain and hail. Diana sheltered under the bridge and I went in to put on my waterproofs, at least going this way the rain wasn’t in your face.

We continued back to Banbury with the weather slowly improving stopping to dump our rubbish and fill with water just below the lock. By now the rain had stopped, so that is another lesson learnt, don’t start early to avoid the weather, wait until later.
Once full of water we went up through Banbury lock, as usual it had loads of water flowing over the top gates. 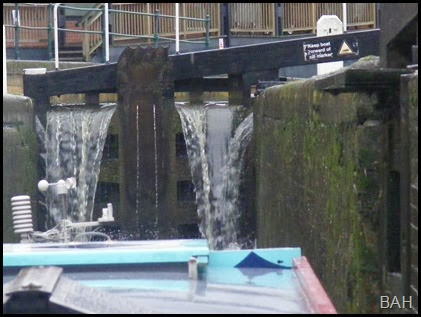 It has been like this ever since they put the large weir in just to the North of Banbury which raised the level by about 4 inches. They even had to put a second walkway on the top gates as the original one is almost constantly under water. Obviously someone didn’t get there levels right. Once through the lock and the lift bridge we moored at the back of Castle Quay shopping complex just passed Tooley’s Dry Dock.

Well that is the last blog I am writing this year. happy New Year one and all.

Popped down to say hello but you were gone!