Last night after we had moored up “Jones The Boat”, trip boat came passed, about half an hour later it came back through the bridge backwards. They had just dropped their passengers off at The Sun and it is quicker for them to reverse along the canal to the winding hole than go on to the next one to turn round.

Later that evening we went over to The Sun for a meal and a pint, they had a very welcoming fire and are a dog friendly pub. We had not been sat there long when Mr Jones of Jones The Boat and his wife came in and sat at the next table and got chatting to us. I mentioned the problem getting into Trevor Basin and he said he goes after them and get them moved. Things were better today when we passed as they have left a passage through.

The moorings were not as bad as I feared last night and the road quietened down from about midnight through till 6 am. so we had a reasonable nights sleep but we did set off a bit earlier than normal at 9 30 am., even so there had been a steady stream of boats coming down since about 7 am.

The canal between here and Llangollen has a couple of very narrow stretches. The first has a passing place and from there 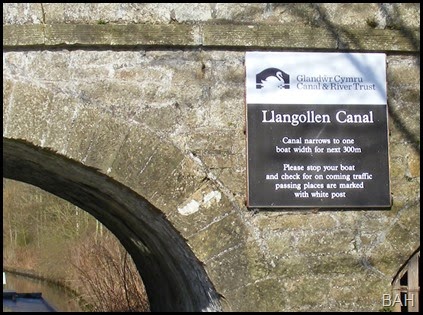 you can see the far end of the narrows, even so I had two boats come in at the top when I was within 100 yard of the end. I found the channel very slow going against the flow so I don’t know how the deep boats get on.

As I said the other day Llangollen charges for visitor moorings, however they will let you stay for 4 hours free of charge if you 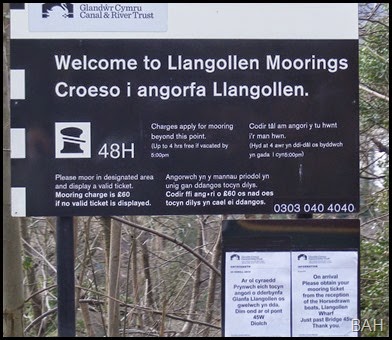 leave by 5 30 pm,  but we had no great desire to visit the town as we have been there several times before. As it turned out they don’t start charging until April so we could of stayed free of charge for the night. A short way passed this sign we past a friend of ours who has been moored here for the winter, he was just buying coal and gas so we offered to transport it back to his boat for him, but first we had to go to the head of navigation 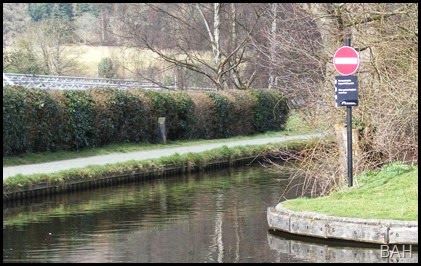 and wind in the basin which British waterways dug out and filled with pontoons to accommodate all the summer visitors who wish to stay overnight. 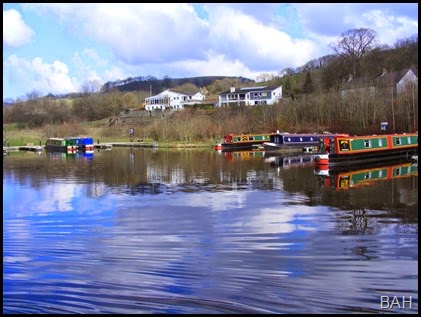 As we headed back down stream we picked up Steve, his gas and coal and transported them all back down to his boat. Luckily the boat moored in front of them for the winter had already escaped so we were able to moor there before going onboard Justice to meet Steve’s wife, put the canal world to right and drink coffee. It was almost 2 pm before we left them. Needless to say there was a boat about to come up the narrows so we had to wait for them, his advice was to leave Llangollen at 12-30 right behind the trip boat and that way you get straight through.

It wasn't long before the Pontcysyllte Aqueduct came into view

and as we crossed the sun shone, unlike yesterday when it kept trying to rain. I wonder how long it will be before CRT want to put a handrail along the offside of this aqueduct as well. Some of the handrail on the tow path side look as if they are held in with  yellow PVC tape. 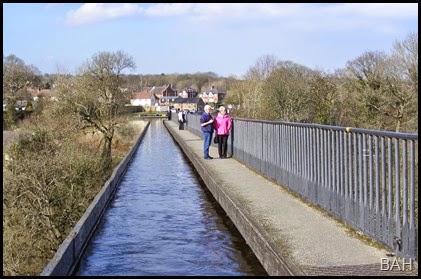 After this we had a good run down with no hold ups, straight through both tunnels and the Chirk aqueduct. You can see here quite plainly the offside edge where CRT plan to install railings to stop people falling off. There are already signs telling you to keep off but that is not enough in this day and age. 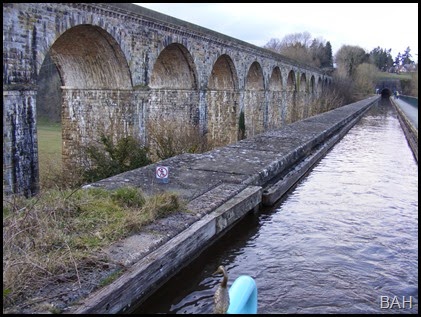 On the way we passed the Kronospan factory that I posted a photo of steaming yesterday, they use timber to make things like MDF and other laments.

We decided to moor for the night on the 48 hr moorings at Chirk Bank as by now it was 5 pm. and this is the first spot we have stopped this trip with no 3 mobile internet service, however with my external Wi-Fi  aerial receiver I am able to log on to a local BT hotspot. 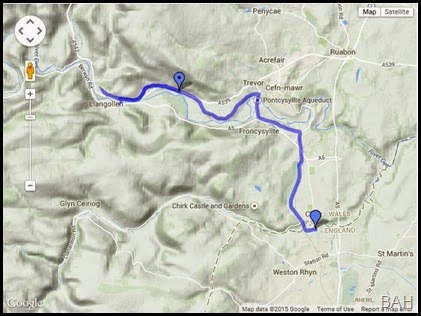 Hello, I'm curious as to how often you can pick up the BT WiFi hotspots on your travels, also what type of external ariel do you have? I'm interested as I'll need to use BT WiFi for work when we get onto the canals, so any help appreciated. Thank you, Caroline

Caroline - Have a look at the BT WiFi map. You do need to be close to a hotspot ( house with BT ) to make it work.

This is where we moored our boats together on Christmas day 2000 and if i remember correctly the only restaurant open was an Indian one.
Happy memories

And we also wandered down to the pub for a few pints I remember.