We set off slightly earlier today as we needed a few things from Halfords and Sainsbury's at Selly Oak. It was rather quite chilly this morning and I had a jumper on and even then wasn't warm. The North Stratford was dug wide as far as the top of the locks when it turned narrow for the locks. Since it was built BWB have installed a narrows for inserting stop planks, it looks as if a lot of people have failed to see it as the wooden fendering is long gone and the steel bolts bent all ways. 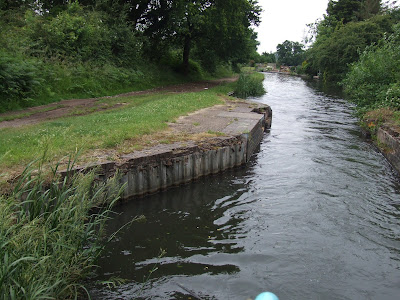 We chugged along until eventually we came to Brandwood tunnel, we had probably met 6 or more boats by now, 3 of them in the narrows opposite Lyons Boat Yard. The tunnel was reasonably dry 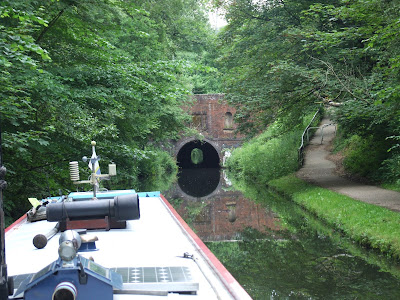 and we didn't meet anyone in there but we did meet a hire boat just after we exited, he was on a lovely line to enter the tunnel, saw me, panicked, hard astern, the bows swung round right across the canal blocking our path completely.  While he was sorting himself out I was able to take this photo of the northern portal. 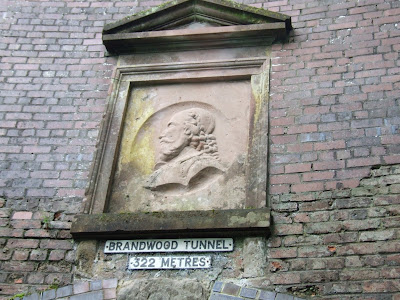 We carried on eventually passing through lock No.1, this was just a stop lock to protect the canal companies water, it doesn't matter how often it gets painted the kids with the spray cans are back ion a week. 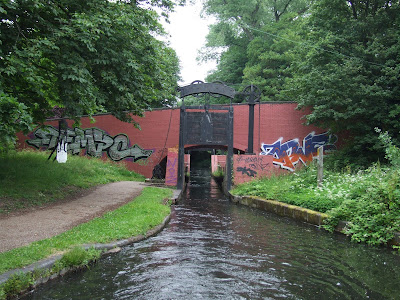 This is not far from Kings Norton Junction where we joined the Worcester and Birmingham canal also originally built broad from Worcester Bar to the top of Tardebigge. There is a Toll house standing on the junction which was vandalised some years ago resulting in a fire, very little has been done to restore it in the intervening couple of years. The finger post on the junction could also do with some love and care with all the paint flaking and one finger is definitely drooping. (The white wooden one) 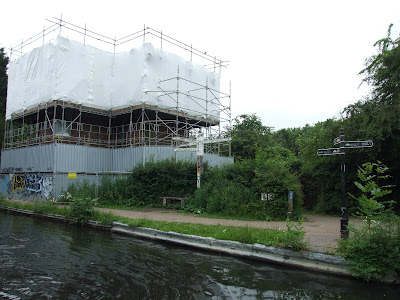 As we passed Bournville not only were the off side secure visitor moorings full there were also a couple of boat moored on the towpath as well. When we arrived at Selly Oak I dropped Diana off to go to Halfords while I tried to hover but the wind round the new student accommodation made it very hard work, I was about to give up and reverse under the bridge when a boat appeared who had been moored at Bournville, as he came passed he informed me there was a two day stoppage at the University Rail Station for heavy lifts across the canal and it had an opening window 12-1pm which he was hoping to make, so as soon as Diana reappeared the trip to Sainsbury's was aborted and we made all hast towards the stoppage where we joined the queue of 4 boats, the lifting had over run and the canal was still closed, opening at 12-30pm, so we got there in time. Once open we all set off again in convoy to Edgbaston Tunnel. This was build as a broad tunnel with tow path, but a couple of years ago CRT decided to widen the towpath and hence make the tunnel into one way Narrowboat working.
As we came into Birmingham I was surprised how quiet it was, the last Sunday in June and not a single boat moored in gas Street, I don't think I have even seen that in winter, even the café boat was gone. 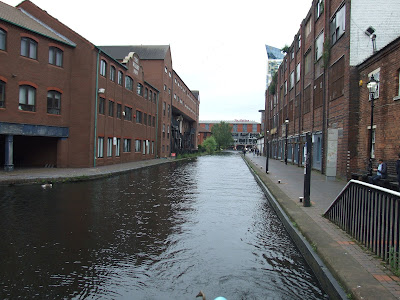 We headed for our favourite Birmingham mooring round behind the Sea Life Centre, luckily for us there was just one space, right behind Nb.Sefton who we had cruised with last time out to Walsall basin. 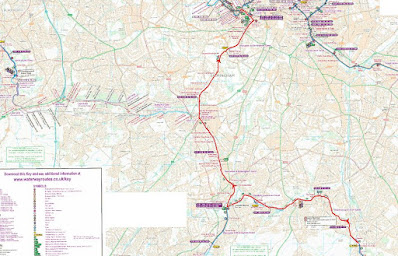 Today's Journey 10 miles and no locks in 4 hours.