Well its the last day of the month and the last day of our trip.Not a bad start to the day, warm and dry but quite cloudy to the north of us which just didn’t seem to move all day.

We set off just after 10 am and I have never met so many boats in so many bridge holes, well over 50%.

I do think CaRT or BW as it was then made a rod for their own backs when they installed the soft piling on the off side at Lower Shuckburgh between bridges 107 and 108 as the backfill they used now supports a forest of willows which are starting to encroach on the canal. The growth on the left is just the overgrown towing path. 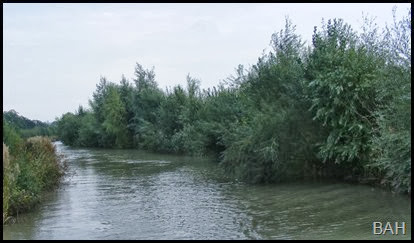 I think BW had the right idea when they designated the visitor moorings by The Bridge pub at Napton, it might have been worthwhile drawing the date forward by a month to October. 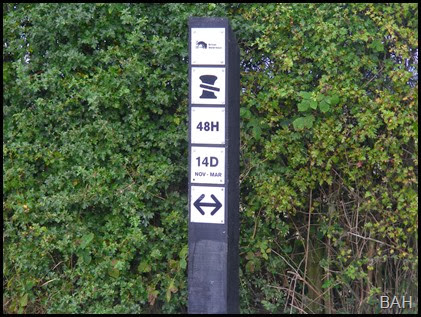 The 48 hr moorings by The Folly were empty but all the 14 day taken again with a boat half way across the “No Mooring” for the winding hole.

As you approach The Folly the fields on the offside, Hillanhi Farm, use to be full of ponies and sheep with one lone deer among them. They have now all gone, the pasture has been mole ploughed and it looks as if its all changed hands, I wouldn’t be surprised to see a mooring go in by bridge 112.

We filled with water at The Folly and while we were doing so a boat came down the flight, so we had a good run up only tuning a couple of locks that had leaking top gates and meeting several boats on the way. Near the top of course there were the Buffalo complete with calves. The mother from this pair wandered off while the calf was asleep but soon came back when it woke up. 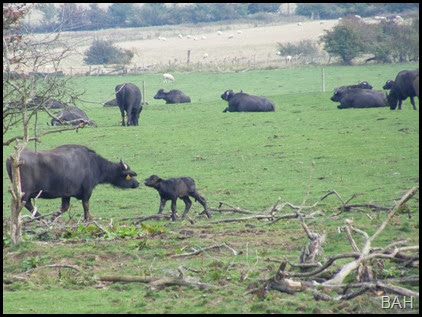 At the top of the flight CaRT still has not done anything about the walkboard on the top lock, the wood below the nonslip surface is rotten and the nonslip surface cracked so it you step on the end there is no firm footing. Once through the lock it is only a short way to the Engine Arm where our new moorings are. A hard turn to the left and lots of welly to drive through the mud. Diana had walked from the lock and had the swing bridge open ready for me and then into our new mooring.