We woke up this morning with our feet higher than our heads, the pound had gone down overnight so we were aground. So on with boots and shorts for a trip outside to loosen the ropes and push us out, at least now the show water would drain.
We decided to move off as soon as we were showered and dressed then have breakfast below the lock, it was a good decision as the water was going down again, this time due to two boats coming up in Big Lock, one was Periwinkle who sells that lovely sheep's cheese I have been going on about, I sent Gill an email and ordered some more, so it was convenient meeting there.

We dropped down the lock and stopped for breakfast on the visitor moorings by the winding hole, As I came in Diana spotted a wheelbarrow in the canal where the bows were coming in, so that was retrieved and returned to the building site near by.

As we made our way back to the marina we met Mountbatten towing Jericho, they had been at The Lion salt works for the weekend. 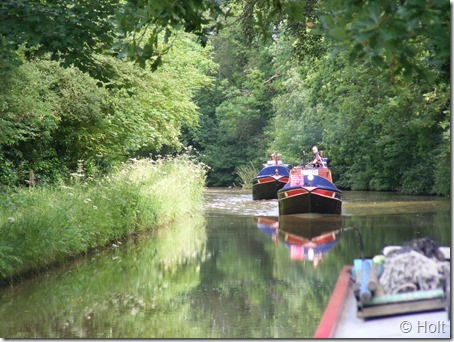 If the number of flowers are anything to go by we should have a good crop of Blackberries by the canal this year. 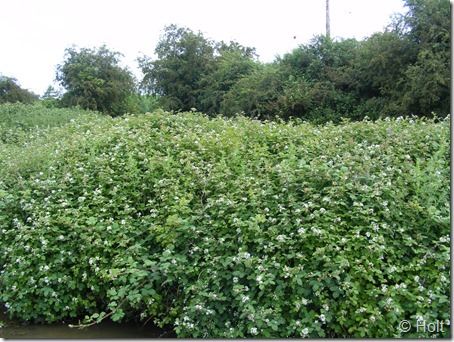 Back at the marina we had to do a bit of boat shuffling as our mooring space had shrunk while we were away, it only involved moving a cruiser along about 6 feet. The marina is starting to fill up now and is over half full. Once moored it was a case of packing up, loading the car and heading home. It was then that we heard on the radio there was a hold up on the M6 with a broken down vehicle between 16 and 17, the traffic was backed up way past 18 where we should join and all the way round the roundabout trying to get on so we carried on to the A50, A500 and joined a few junctions lower.This trip we have been out for 57 night,covered 444 miles and been through 242 locks. 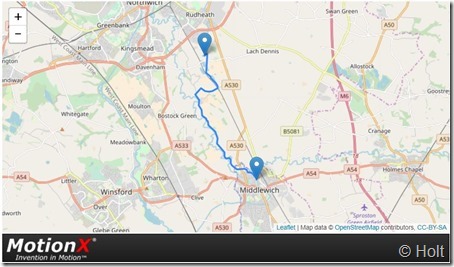