Boy it was warm yesterday evening, we had the doors open all evening and no lights until late to try and keep cool without the bugs getting us. Overnight we had the rear slide open in the bedroom and the louvers in the engine room side hatch so had a comfortable night and no problem with the mozzies.

This morning at 10am we walked down to the CRT office below the Anderton Lift visitor centre to see if we could get down the lift today, a good result, she took the details, asked where we were and said be on the holding quay at 1015 for a 1045 decent. It was actually just gone 11 when we went down as they were running late.

The locks on the River Weaver are running on a restricted time schedule to save water, but the level below the lift was spot on the mark and from the discharge from the chemical works opposite it looked like it had a reasonable flow going. 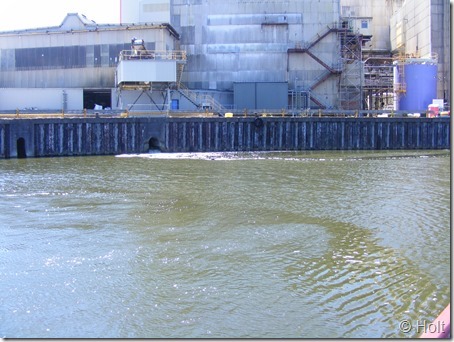 We headed downstream towards the ship canal. CRT have been dredging around the bottom of the lift as they now get a visit from the Daniel Adamson so need a bit more depth. All the dredging equipment was moored just before Winnington Swing Bridge. 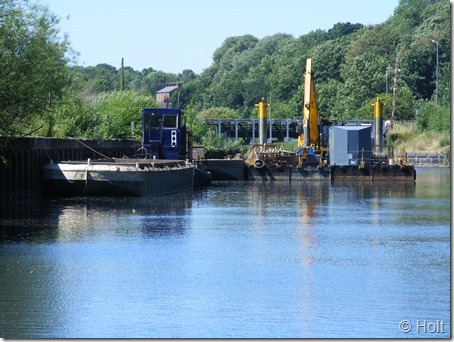 As we went passed the Barnton Cut moorings we were overtaken by a wide beam boat and within a few minutes we both caught up with another wide beam. I rang Saltersford Lock to let them know we were on our way and he told me we would be going down on the 1230 locking which timed out just about right. It was then that a Lancaster Bomber flew over us, but as it crossed the canal I was too slow getting the camera out. We arrived at the lock and there was already a Narrowboat waiting and the lock gates still shut. For some reason the notice that CRT sent out on locking times said they are locking on the hour, every other hour, but in actual fact they are locking on the half hour every other hour.

The four of us tucked easily into the lock once the gates opened and spot on half past the top gates closed and we were going down. The Narrowboat beside us was a bit unusual in design with a high flared bow and a raised rear cabin area.

One of the wide beams stopped at Acton Bridge and the Narrowboat just before Dutton Lock. The gates were open on Dutton lock and it was dead on half past one. Good timing we thought, but no. We wouldn't be locking down until half two. So we all satin the lock for an hour before we were on our way again.
We could see clouds of dust on the offside bank a short way passed Devil's garden moorings, when we got closer we could see it was a convoy of quads out for the afternoon, Diana counted 15 of them. 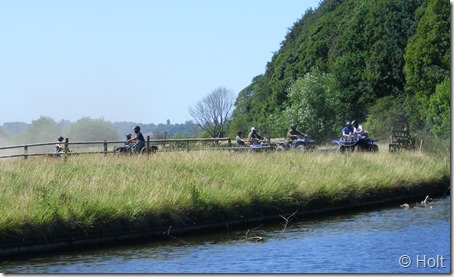 We moored a short way before Sutton swing bridge on the last of the visitor moorings. We hadn't been here long when we heard the two tone sounder to indicate the bridge was about to open, after lots of grumbling and groaning from the bridge as it swung back there were two toots on a steam horn as the Daniel Adamson came up the river. 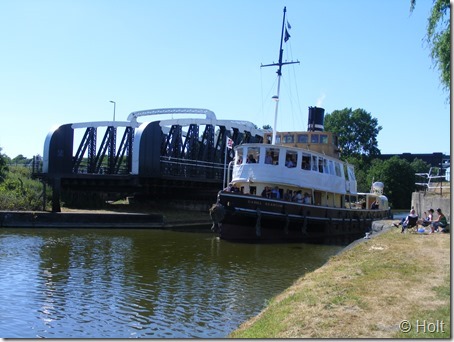 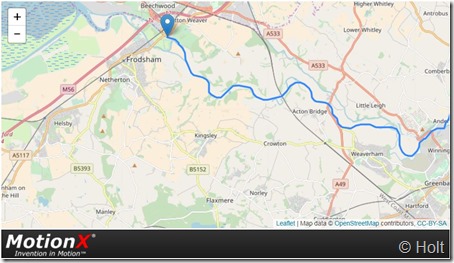