Last night we had dinner with Ann and Iain in the Big Lock, I was a bit concerned from some Facebook postings it was becoming a burger establishment, nothing could be further from the truth. The Burgers are very good but only a small part of their menu.
This morning before we could leave we had to do a bit of shopping for perishable things we couldn't bring with us, so at 10am we were off to Lidl which is a very short walk from where we were moored. While we were there I bought a new smoke detector as the old one is playing up. this one has a 10 year none replaceable battery, so one thing less to worry about.
Back on the boat we set off up the locks, just as we were losing the ropes a boat came passed so the Middlewich three were with us, the only thing was they left the bottom paddles open, but they had only just bought the boat from Kings Lock so lots to learn.
Straight into bottom lock but Diana was unable to draw the top paddle, I went up and tried and was able to bounce on the windlass without moving it, red dry rust on everything, we eventually got it open and gave it a good oiling before we left it.
We turned hard right into the Wardle canal and them up through Wardle lock which the boat travelling ahead of us just vacated. Above the lock we exchanged pleasantries with John and Gillian who where out in their front garden. Passing the site of the breach repair I noticed that CRT have installed some mooring rings at the west end of the new concrete section, although we had met a boat Stanthorne lock was against us. Ann and Iain had left before us this morning while we were shopping but we found them moored overlooking the Weaver between bridges 21 and 22, so we slipped in and moored just ahead of them, we had planned on going a bit further but they stopped for lunch and the weather was not as pleasant as yesterday so decided to call it a day.
For some reason I am unable to post to Blogger from Open Live Writer if the posting contains a picture so I am adding the map afterwards
Today's Journey 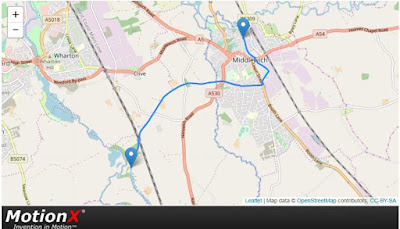 Tom on Waiouru has done various posts on the issue with OLW. It’s a Google change. http://www.narrowboat-waiouru.co.uk
Steve NB Tumbleweed

Thanks Steve on Tumbleweed

There have been problems with OLW to Blogger for nearly a month. Nothing has worked so far to enable pictures to be loaded. It may well be that if you look back at older posts your photos will have vanished too! There is a possibility that Google will have stopped ar**ing about at the beginning of March. We're holding off moving our blog until then hoping things will get sorted.
Pip NB Oleanna