Bit of a later start as we had Items to post, we waved goodbye to Ann and Iain as the set off well before us. Just as we were about to set off one on the Blackpool Boatshed Youth boats came by so we hung on for them to pass, then the second on appeared so we 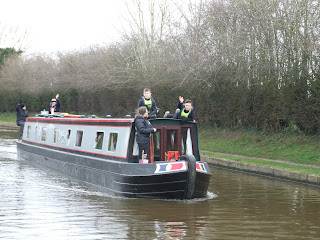 hooked the ropes back on, not far behind was the third. once they had gone one came the other way so it probably took us 10 minutes to actually cast off.
We stopped at Hurleston junction, its due to open Friday and I was hoping to find out if it was likely to open early, but due to the fencing I couldn't get up to the top lock where all the activity was.
CRT are doing a first class job cutting back the off side scrub on 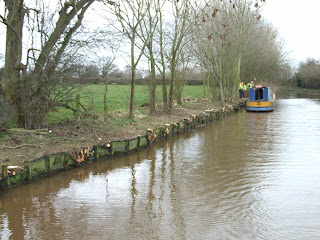 the run into Nantwich. I don't know if they are using volunteer labour to do the work or if its CRT employees but they are using a traditional craft to take the brush to the chipping machine. 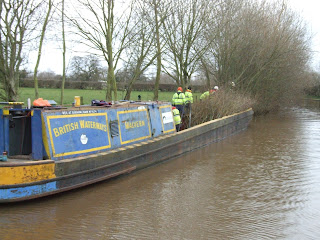 We stopped for water at the Nantwich services but had to wait for a while as there was already a boat getting water.
There were lots of mooring spaces along the embankment both sides of the aqueduct, why is it never like that when we want to stop. One of the wood sculptures of a dog now supports a woolly scarf. 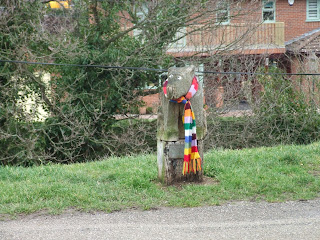 As the weather had taken a turn for the worst we decided to make just above Hack Green Locks our destination for the day, we are in no hurry to get anywhere. It was by the locks that we saw our first lambs of the year. 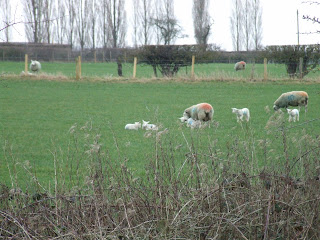 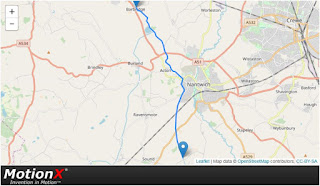 Plenty of space in Nantwich at present, as I understand they recently served notices to boaters who have been moored there for ages.
Steve
NB Tumbleweed