We were surprised how busy the railway was last night, the line is very close to the canal and we have moored along here before, but don't remember so many trains using the line at night. Before we set off this morning at 10 am another boat came by, but I expect the locks would be against us anyway.
At Beeston iron lock there are notices warning boats not to share the lock due to the sides being distorted but we now from experience this shouldn't be a problem for to modern 57 foot boats, but I wouldn't try it with two full size older boats that would probably also be a couple of inches wider.
We only went as far as the winding hole as the next lock is closed. The deer were sunning themselves on the top banks of the old oil storage depot. 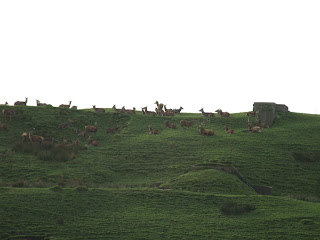 When we got back Beeston Iron Lock we couldn't open both gates fully, just like when we came down, probably because the off side one never gets used so Iain went in first and shuffled over and then I went in beside him. At Beeston Stone lock the bottom gates were both fully open, even though we closed them on our way down, by the time we had locked up there was a boat full of kids ready to go down heading for Chester, but were unaware of the stoppage. They were one of three boats hired from Norbury Wharf by The Boathouse Youth from Blackpool. We met the other two boat at Tilstone Lock.
Looking up from where we moored last night you can see The Wild Boar Hotel, this was up for auction last December and is now boarded up in parts. 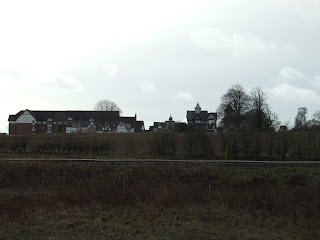 One of the features of this bit of the Shropshire Union Canal are these round buildings beside the locks, they have a brick domed roof with a cast iron pipe sticking up from the middle. Where these at one time lock keepers huts with a central open stove or where they built for some other purpose? 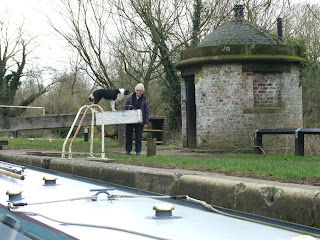 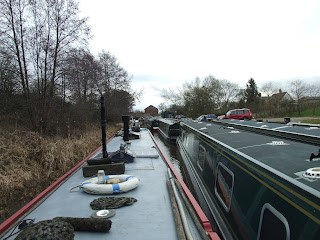 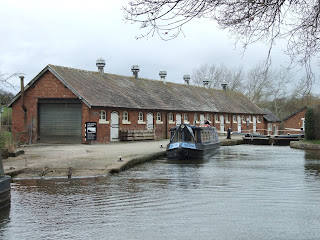 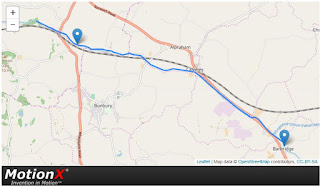 I wonder who that white haired person with the dog on the lock beam is. Can remember meeting her 😊

Well I remember meeting you at the Bridge Inn Ratho and joining you on the opening of the lowland canals on Gamebird. Hope you are well.
John Foster

Shame the three boat with children on will not make Chester. They past us on Saturday late afternoon just going down the Tyrley locks - and boy were they excited, but I guess it was the first lock of the trip from Norbury. Enjoy the pub, it's one we use when ever that way.

John Foster, if you message me your contact details I will pass them on to Ann for you both to get in touch

I thought the lock above Iron Lock was called "Beeston Stone Lock" ?