I had just untied the front rope this morning when a boat appeared coming towards us so I held in until he had gone, but no sooner had I let go at the stern another appeared followed by a third so I slid very slowly passed the moored boats giving them plenty of room, I then discovered that the boat at the front of the moored boats was also about to push off, it was  Fenchurch again, we have seen them on both of the previous days, but hadn’t realised they were on the other end of the moorings to us. This is them passing us on Saturday at Alvecote. 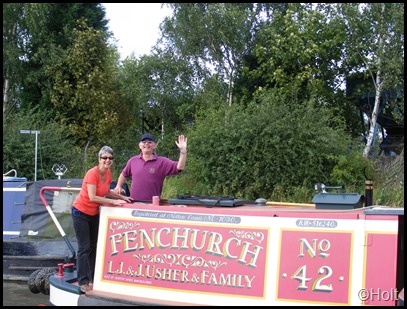 We stopped for water and empty the rubbish by bridge 48 where Fenchurch passed us again only to catch them up at the bottom of the Atherstone flight and give them a hand up the lock. In return they drew the paddles on lock 10. After that we were to meet a boat at every lock, sometimes there were 2 boats in some of the short pounds. At lock 7 we met a steam powered Narrowboat called Tixal just coming out of the lock. Fenchurch pulled over for shopping just below bridge 43A while we continued to the top of the flight, once clear of the locks we pulled over for a late lunch in steady rain. If the rain continues we will stay here overnight.

Well 2½ hrs later and it fined out so we set off again there wasn’t a breath of wind and the sky a nice light blue. We passed a boat that had its complete roof covered with solar panels the most I have ever seen on a boat. 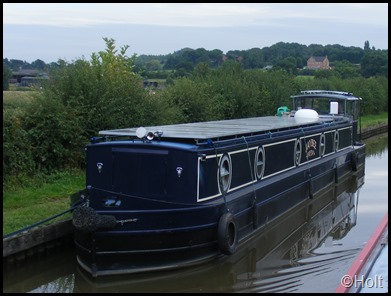 We passed boats that we had seen at the bottom of the flight this morning and continued on through Harts Hill where there were only 3 boats moored, The old British Waterways yard is looking quite sad but on the up side it looks as if a cafe may have take over a building on the left hand side. hard to say as they were just locking up as we passed. A bit of Goggling shows this to be The Landgirl’s Cookery School and Tea Rooms.
The smell from the bone factory wasn’t too bad but it was probably just drifting the other way. We carried on to just before Springwood Haven Marina before mooring for the night just before 6 pm. 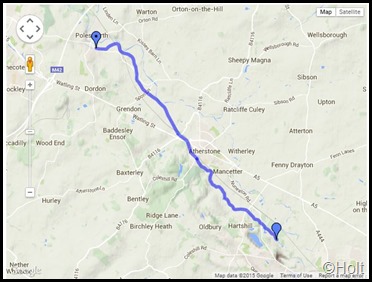