The first boat passed us around 7 am this morning but we didn’t move until our normal 10 am. We only saw one day boat and they were just mooring at the Tame Otter, I expected more on a sunny Bank Holiday weekend.

Down to Fazeley Junction where we turned left onto the Coventry canal again, we had left in minutes before mooring up last night as Whittington to Fazeley is the Birmingham and Fazeley Canal, There was no queue at all at Glascote Locks which surprised me but there was a boat going up ahead of us. At the bottom lock we had a chat with the owners of the lock cottage, also a lady who helped at the lock, it turns out she was living on a boat but has just had to return to bricks and mortar. As she walked passed us at the top lock I pointed out she had left her windlass behind but it was one she borrowed so I was able to give her one from our stock with a swivelling handle.

It wasn’t long before we reached Alvecote where this weekend the working boat rally is taking place so we moored up just before the marina to visit. 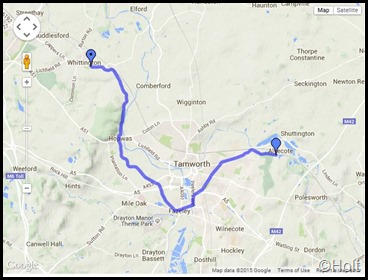 Our timing was quite good as just after we hade moored the first of the old boats came by on their parade run. 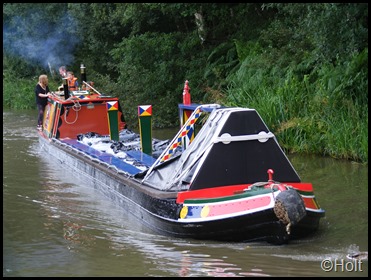 After the boats had gone by we wandered down to The Samuel Barlow to check the beer out and buy home made fudge and Welch Cheese, O and we also failed to resist one of the  beefburgers being cooked on the BBQ. There were a lot of boats there including 4 steam powered ones. 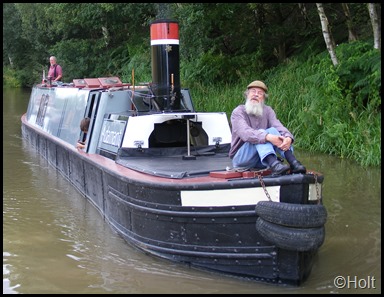 After spending a couple of hours there talking with old friends we decided to be on our way again and although it was turned 6 pm we decided to set off while the canal was quiet, we really didn’t want to be in the mellay if the boats start moving in the morning ready for another parade. As you can see there were lots of boats there.

We made our way slow through the moored boats and headed for Polesworth for the night arriving at about 7 pm. It was a bit late to prepare diner and we had already had a Beefburger so settled on an Indian Takeaway from Maya Bangladeshi and Indian Takeaway. They have an offer of a set meal for one for £9.95 so we had two of them expecting them to be small portions, wrong, it was huge and we have not eaten half of it, so its Indian Sunday Lunch tomorrow as well. 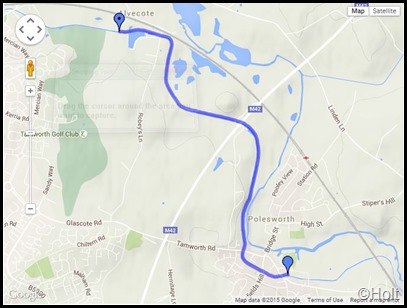