We left home early for us to travel to the boat, spot on 8am. We don’t normally do this trip on a Friday and especially the Friday before a bank Holiday but it all went amazingly well with very little holdup, bit of a queue at the A14 M6 junction but that was about it really so we arrived before mid day.

After unloading the car onto the boat we drove into Armitage to The Plum Pudding where we sampled their Piattini menu which gave 3 different dished for £10.95 so by choosing different dishes we got to sample 6 of them. They are also running a loyalty card scheme where they stamp your card on each visit, 3 stamps = a free starter.

We reversed out of our berth just on 2 pm. and once out on the canal turned right. We were to meet 10 boats between here and the bottom of Wood End Lock, but even so we were second in line for Wood End Lock so I don’t know how many had been there earlier, another arrived behind us before we set off down.

At Shadehouse lock there was a Volocky (Volunteer Lock keeper) who had the lock ready when we arrived and also told me to stay on the boat and he would do the offside. There was also one at Middle Lock and he indicated to the Volocky at Junction Lock that we would be heading down the Coventry Canal. There were several vacant moorings just into the Coventry Canal unlike through bridge 90 in Fradley Village where it was choker block. We continued on past Huddlesford where again there were vacant 48 hr moorings. We continued on to where the Coventry joins the Birmingham and Fazeley canal just before Whittington Bridge where we moored up at 1730 hrs. 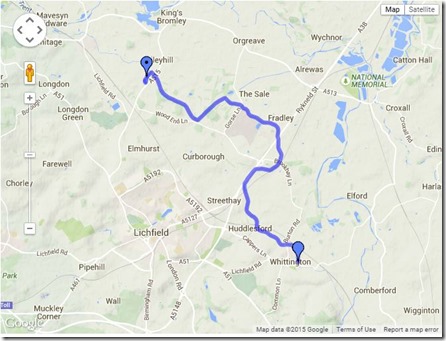