Last night it was just a 15 minute walk up the Golf Club where the talk about the underground canals was taking place, when we arrived they were putting extra seats in the meeting room and by
7-30pm I estimated there were about 150 people in the room and they turned another 40+ away, so we were lucky to get in.
The talk was very interesting with some photos of the underground canals but it was mainly about mining in the area, at the end it covered what the restoration/conversation plans are for the Delph, which can be seen HERE. I am sure it will look very pretty.
This morning we took a walk round the Delph to see the ongoing works and I took several photographs that can be viewed HERE in my Dropbox. Behind the yellow digger there is a large square of concrete. When they where clearing the site they discovered a short tunnel in the brick wall. It is thought that the tunnel was to carry coal on a horse wagon straight to the corn mill that burnt 8 tons a day to drive the steam engine. As the tunnel is in the way of the new viewing platform they concreted it up and it will be hidden for ever.

We pushed off at 1050hrs heading back to Anderton the weather felt slightly warmer than yesterday but it kept trying to rain. As we crossed the swing aqueduct I was able to get a photograph of the vertical lift bridge that collapsed in 2016 closing the canal. In the background is the M60 high level crossing and in the foreground the Barton swing road bridge. 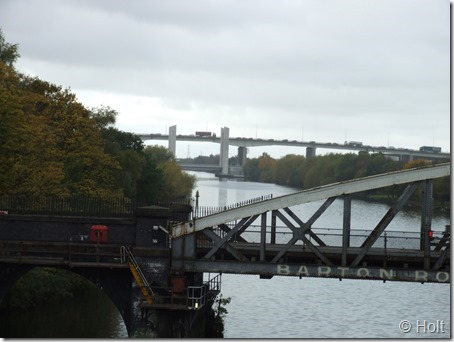 The Manchester News has a video of it falling.

As I posted the other day there is a new Metro Bridge across the canal that will take the line to the Trafford centre. Although I didnt see anything about a navigation closure they did shut the towpath for a few days in September. The new bridge is about 2 meters 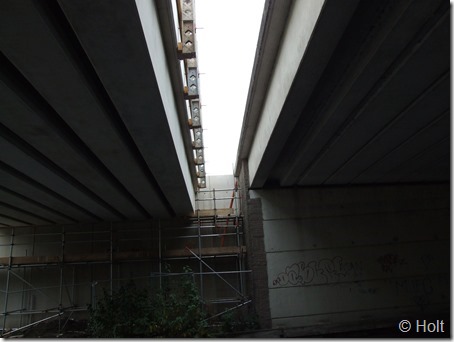 from the A5181 road bridge and as the work effects the road they have a warning notice with the outline of a steam train.

A short halt was required to remove some polly and fishing line from the prop shaft. It also highlighted that I need to put a new seal on the weed hatch lid as this one has started leaking. Its surprising how a bit of rubbish round the shaft effects the performance of the prop. Once clear it was full speed ahead to our mooring for the night at Dunham Massey, There are just two mooring rings here if you know where to look for them. Here is a clue from Waterways Routes digital map. 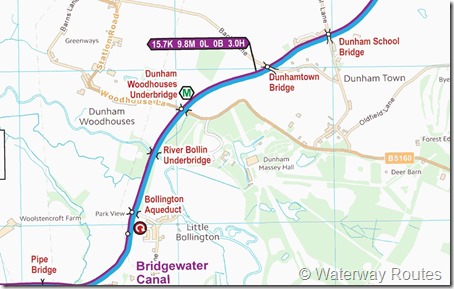 Once moored I took the opportunity to put a new seal on the weed hatch lid. The closed cell foam that I have at the moment is not as good as what I have used in the past and is not giving very good service at all. 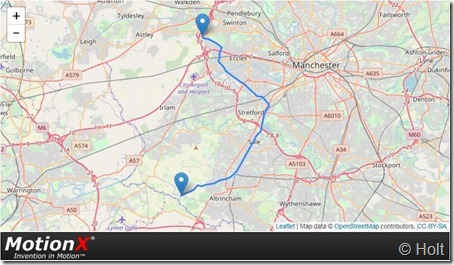