Today was good timing and bad timing. As we were getting ready to set off loads of anglers, half of them youngsters came by. I asked what time the match was starting and they said 9-30 so we would be through before they started. Good timing.

I dropped the rear rope off and let the stern drift out as I walked to the bows, lifted the fenders and as Diana took in the front rope pushed the bows out. Harnser is now floating a little over 2 ft from the bank an easy step. Half way along the boat and a boat comes round the bend from behind, I step aboard at the stern and there is plenty of room for him to go round us, but then a boat comes round the bend towards us and there is not room for three. I wave to the boat coming towards us to go to the left of me, the 2 foot gap and set about getting the bows behind the passing boat to make room for him. Bad Timing, 2 minutes earlier I would have been lead boat and clear.
Next we came top another fishing match, they were starting at 10 so we just cleared them before they started as well. Good timing. 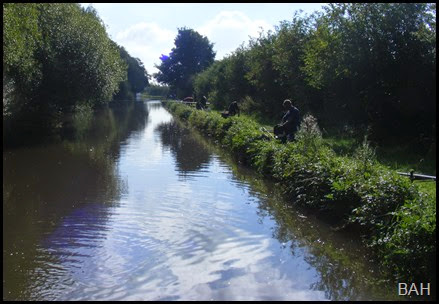 Again we were to meet lots of boat all the way to Stone so we didn’t turn any locks all morning.

At the first lock Diana took over steering so I was down the bow with the camera. Bridge 82 had a wonderful reflection with its multiple curved brick courses. I know its not the correct way to 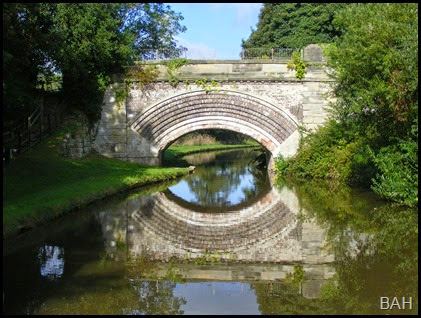 frame a photograph but it captures the scene.

Since we were last this way, about 10 years Aston Marina has appeared, it is so large that it has a one way system,  as wall as several retail outlets.

Just before Stone we passed this memorial bench with flowers at the canal side. The first bridge we came to in Stone has a wooden sculpture standing beneath it on the offside, this is splitting and cracking with age now. 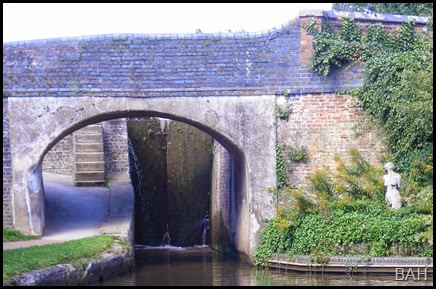 With all the new building going on in Stone its good to see that the old Jude’s brewery is still standing. I think that paintwork like on this building should be listed and maintained. 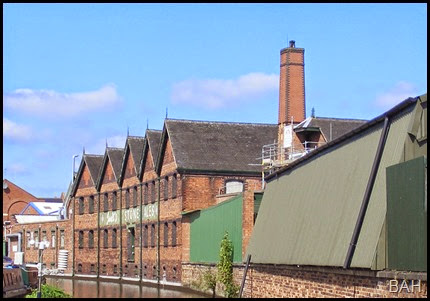 In Stone there were two volunteer lock keepers one at Stare Lock and a lady at Yard Lock who then walked up to Newcastle Lock. It was here that we caught up with the boat that passed up just as we were setting off this morning, you can see them just entering Newcastle Road lock under the bridge that has its own horse bridge. 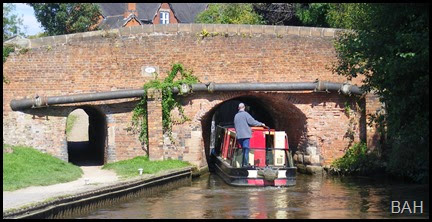 Just above the lock is this lovely little canal Tug, if ever I could fall in love with another Narrowboat this would be very high on my list.

Soon we were passing Roger Fullers yard with his narrow gauge railway and Tina Paramore’s butty, originally “Unspoilt by Progress that was built to go from the Black Country to the Black Sea and sank on the continent somewhere for a while near the mouth of a lock.

Coming out of Stone the traffic dried up completely and it wasn't until we were going up Meaford House lock that I spotted a boat coming up behind us, well the chap setting was, I didn’t see the boat and he turned up at Meaford Top Lock just as we were leaving.

From here like the K&A the railway gets very close to the canal at times. 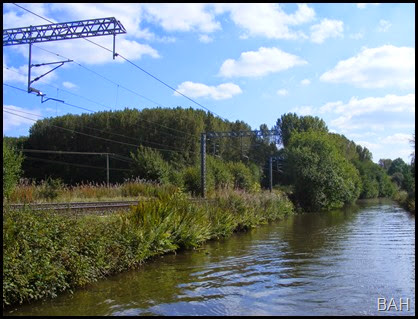 and is not that far away at the moment. Passing the shallows a short way before Old Road Bridge 104 this young Heron was trying his hand fishing in the offside shallows, he didn’t seem at all bothered about us as we went by. 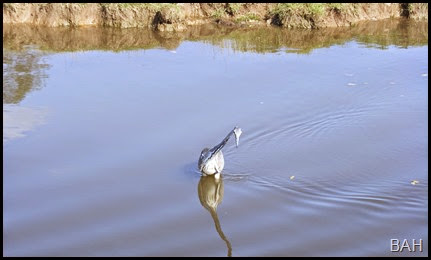 We continued on, stopping for a short time to chat to NB Albion who was moored on the 24hr moorings just north of bridge 104, he said his guide book said there was good mooring just below Trentham lock so we carried on to there, but there was next to nothing there and the railway was right close to the canal again, so I reversed back down to south of bridge 104 and we have moored there for the night. 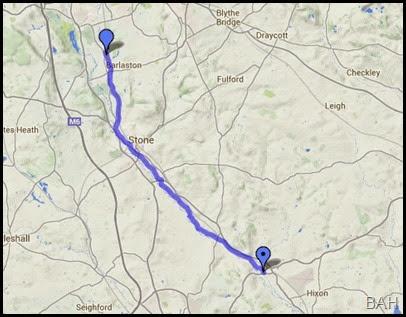 When we passed through the Newcastle Road Bridge a couple of years ago, we were surprised to see a pair of seemingly fearless wagtail that had made their nest in the lower lock gate. Being steel gates there were some ledges all the way up and the outside edge of the gate had a few inches of steel which allowed the wagtails nest to be hidden behind it.

On the K&A they have attached nesting boxes to the cross members for them to nest in.
See
http://nbharnser.blogspot.co.uk/2014/05/ferris-railway-bridge-tue-6-may-2014.html