I thought it may be difficult to find thing to say on the way back, but so far not a problem.

9 30 this morning the boat that was on the good visitor moorings came by, so he rubbed it in by making all the locks against us. We set off at our normal 10 am.

At the first lock the top gates were open so we waited for a boat still in the second lock. He took a long time exiting the lock and we could see several people milling about. It turned out a log had floated behind the gate which I removed from the water when we finally arrived. Between the boat leaving and us arriving the people milling about had changed and the ones there now were all 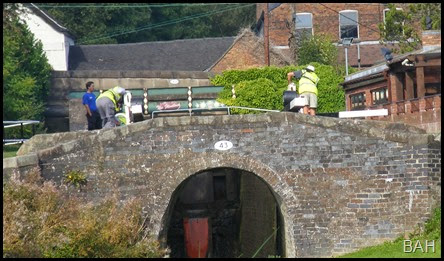 in Hi Vis jackets and life jackets, maybe that’s so they don’t get run over by a boat.Anyway it turned out to be an IWA volunteer working party repainting the locks and there chatting to the CRT chap was Alison the IWA Volunteer coordinator. 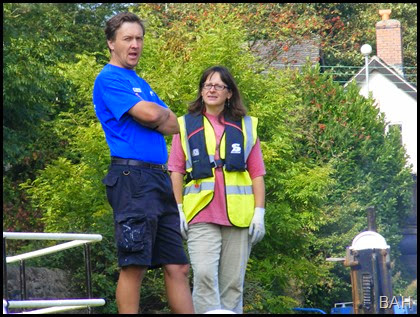 After leaving the lock I passed through this bridge, 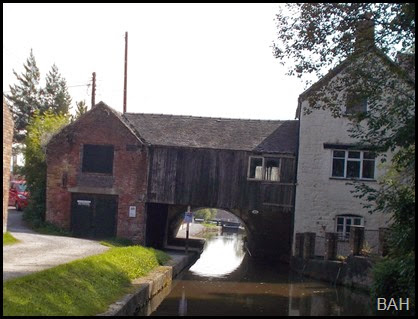 Diana had walked ahead to see if there were any vacant moorings at the Flint Mill. At this point I also found out who the other bods were who were milling around, they were part of the organising committee from Stoke boat Club for the forthcoming  40th anniversary of the restoration of the Caldon

Diana walked back towards me to say they were closed and I dropped to tick-over that’s when the engine stopped. I shot below to restart it but luck, Diana managed to grab the centre rope but even at this slow speed she couldn’t stop Harnser before her bows were in the bushes the far side of the cut and the front bench tipped back against the front doors with a crash. The problem was air in the fuel, due to a dirty, but not filthy primary filter. This is mounted near the fuel tank so the line from here to the engine is under vacuum, the fuel tank is only a third full so that adds to pull required, so it doesn’t take much to suck a bit or air through a small leak, even the filter seals. The filter was soon changed and the system bled through including the lines to the injectors and we were on our way again.

The only other boat we met all morning was the Beatrice run by a charity for children, This is the third time we have seen her while we have been her so she is quite busy. She was in the lock above us as we filled this one. I have seen water spouts before 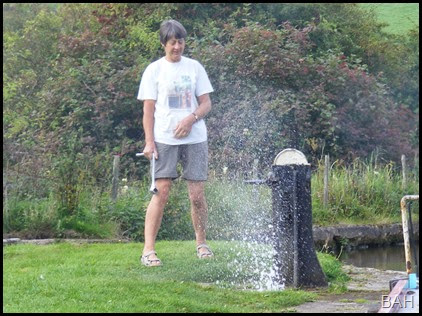 with the rush of water when you start filling a lock but this one continued all the way through, so be warned, its lock 12 on the Caldon. We watched with some trepidation as this farmer crossed 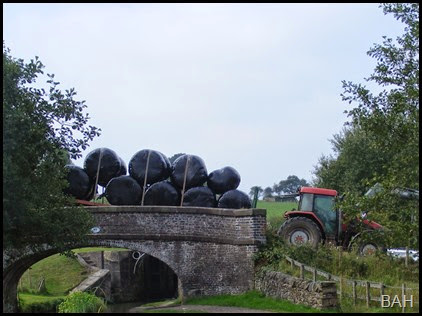 the bridge, he had more luck here than at the railway line where it all bottomed out.

Junction once more, it’s the forth time we have passed this spot.

Our target for tonight was Milton. At Stockton Brook locks there are two sculptured walls, one of them contains an old boiler 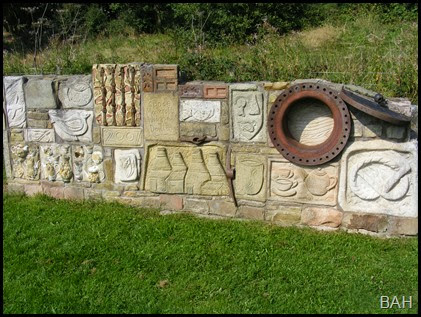 flange, pickaxe and some pottery, unfortunately the pottery is all broken away apart from one piece, maybe it was frost damage but somehow I doubt it.

Engine Lock and a Black Prince hire boat was coming up as we arrived, number 3 of the day and as we exited another boat arrived, in passing he asked if this was the last lock, I said depends where your going to which he replied Leek. He has really done his home work.

So that is 4 boats we have met all day, we have seen more since we have been moored up her in Milton. Diana went into the village and bought some “Oat Cakes” while I set to scraping more rust off the roof before touching all the places up with Kurust. 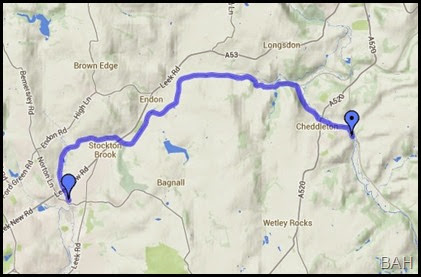