Twenty to ten and we were off along the Leek Canal  for the last mile to Hazelhurst Junction where we turned 350°to the right, under the bridge and  down the Hazelhurst flight, a short delay at the third lock as the boat coming up turned it just as we were leaving the second, they are in open view of each other. Passed more towpath surfacing work and under Hazelhurst Aqueduct, 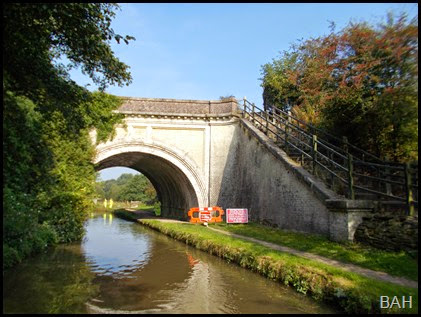 just an hour ago we were going over this and we could have walked it in less than a minute by coming down the steps.

There is a tremendous amount of towpath work going on along this canal, I can only assume that CRT have received outside funding for it all. 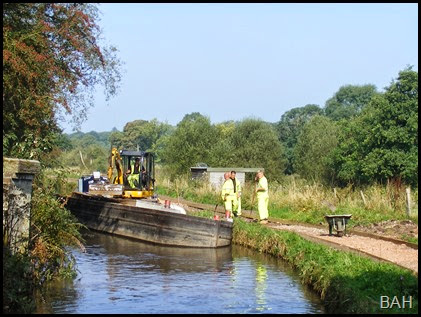 A little further down the canal I spotted this strange structure like Dr.Who’s Tardus in the woods on the offside. 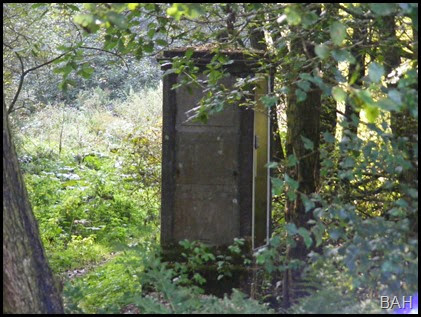 Cheddleton Flint Mill is in much better condition than when we were last this way with even the two waterwheels turning. We didn’t stop as we had already passed the visitor moorings. 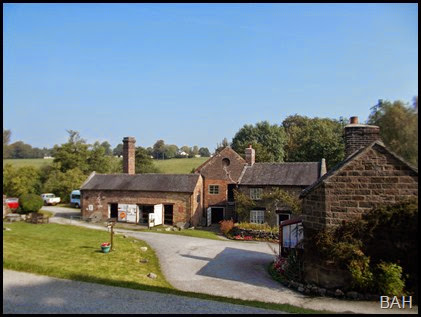 The river section of the canal was behaving its self well with the level in the green sector, but it did give us bit of a boat wash on the way out of the lock. 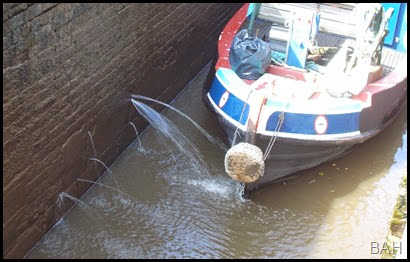 Soon we reached the final lock of the canal and since we were this way last they have installed a curtain across the exit cut out with Froghall Tunnel profile as its quite a low tunnel. The good 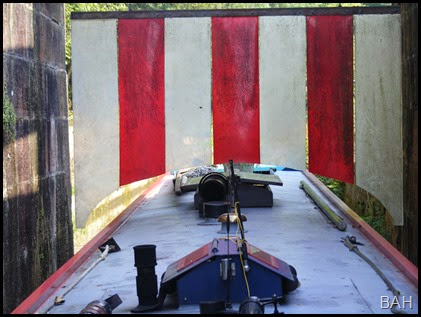 news is we got under it with just the tip of the tiller pin touching so with spirits high we set off for the very end, a first for us, but first we had to get passed the dredging that is going on down 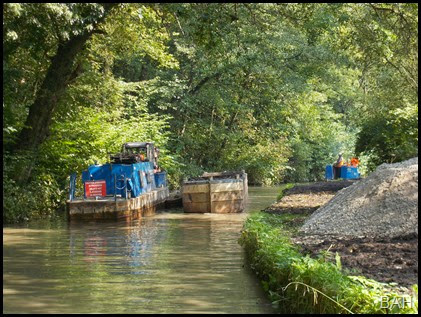 this section, as soon as the chaps saw us coming they moved to the side to let us by and even the tug with a full hopper let us by, he must have been struggling because I was driving through the mud. They are spreading the spoil along the towpath and on the off side. 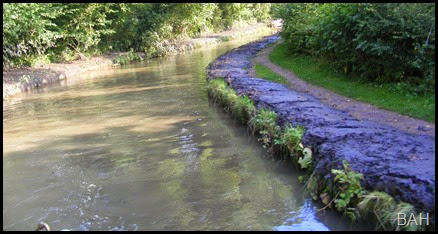 The tunnel was a close fit and as its short I didn’t bother to fix the tunnel light, mistake, without it it was quite difficult to see 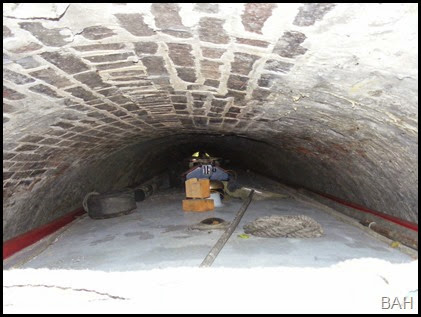 and I did just touch one handrail at the front. The tunnel gauge at the lock is a bit conservative by about 3 inches, the lowest point being a bulge in the roof about a quarter of the way through where I had about 3” above the tiller pin. I wish I hadn’t bothered washing my hair this morning as it rubbed the tunnel roof several times and although they don’t show in the photo its covered in cobwebs. Often my head was on one side trying to see where I was going over the roof. Out the far end and its quite wide, but a very tight exit bend, just like the entrance was. 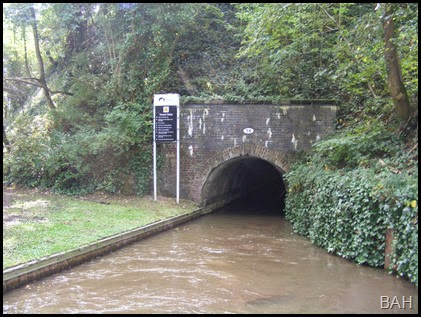 We went right into the old basin through bridge 55, we couldn't go to the very end as there was a gent with a radio controlled

paddle steamer that he was just trying out, but we did get in well clear of the old wharf with its “No Mooring” signs.

After discussing the finer points of boat ballasting with the gent to bring the bows of his steamer down a bit I reversed back through the bridge and turned to my right going forward down number 1 lock of the Uttoxerter Canal into the basin below. The basin offers 5 day free moorings on floating pontoons, there was only one boat using them when we arrived, but even so another

boat thought it would be OK to ignore all the vacant slots and moor in front of them on the lock bollards. We moored for a while and had a look round the old lime kilns which are really the centre 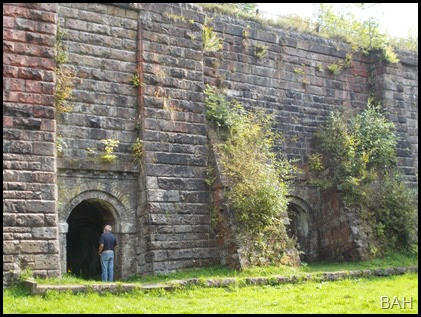 of the place. It would be nice if they could fully restore at least one of them. The front looks sound as do the firing arches, but they have been filled from above so you can’t see any of that. There is a board giving information about the funding of the basin and installation of the moorings. 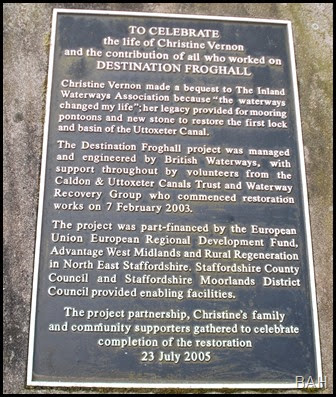 Later in the afternoon we set off back up the single lock and back through the tunnel, this time with the light on which made life much easier, not a touch. It was gone 4 pm when we came to the first of the dredging team, he was unloading the hoppers, I expected him to be getting ready to go home, but they are working until 6 pm. The barge carrying the digger is fitted with two outrigger floats which are about two feet wide. This extra four foot of beam made it a tight squeeze passing him, I don’t think a full beamed old boat would have got through.  Then after passing a full hopper and tug we came to the dredger its self. He pulled hard on the offside with his empty hopper in front of him to give me lots of room. Just as well he did as even a meter from the towpath I was stuck on the bottom and had to back up quite so way to get by him passing him very closely.

We met a couple of boat on our way back up the canal, both in awkward spots on narrow bends before coming to this unusually shaped bridge hole known as Cherryeye bridge. 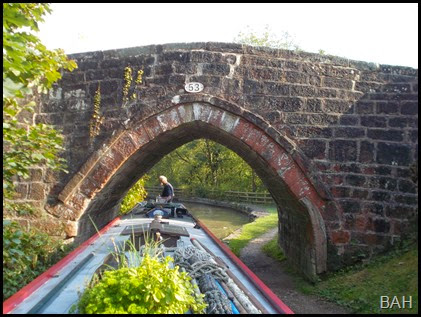 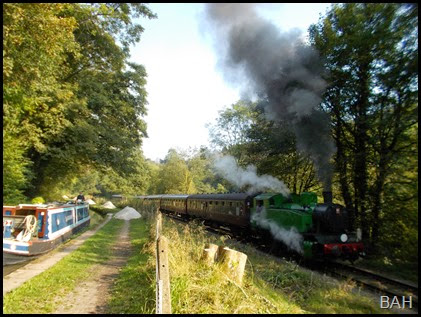 works quite hard. As  you can see its very close to the canal.

No trip of the Caldon would be complete without a photograph of the famous cantilevered station platform at Consall Forge. Here 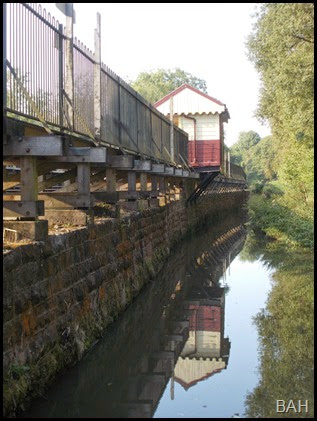 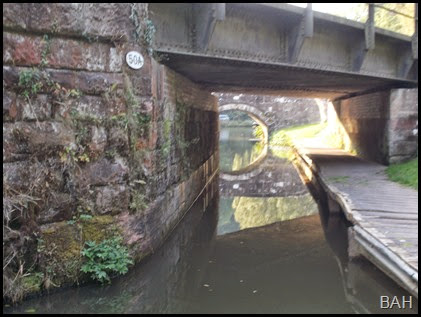 other so I gave a good blast on the horn, but it wasn’t needed as he was mooring to go to the pub. Just beyond here is another 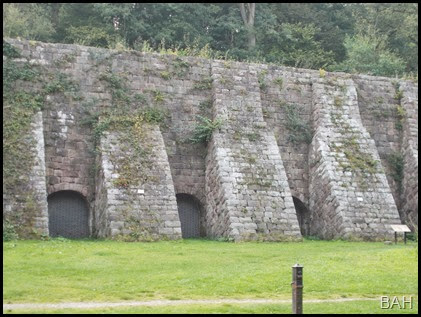 large lime kiln again looking in very good condition. We were soon off the river section and back onto the canal, only a short run now to our planned moorings for the night at Basford Bridge so that we could eat at The Boat Inn. There are two lots of visitor moorings, the first and the best were full with two boats. so we had to continue to the second 24 hr moorings which must be the worst designated visitor moorings on the system, we eventually found some mooring rings on the bit we are on, but the boat 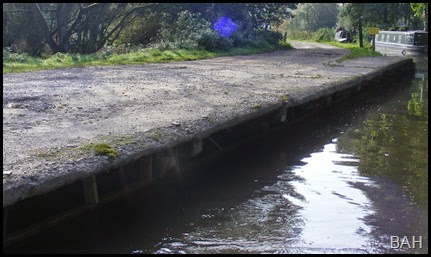 length behind us in just a concrete edge jutting out over the water, no rings, no where to drive pins in and no edging,. Its actually a slip weir, but I won’t complain to CRT as they will just close it and you won’t be able to use the bit I am on. 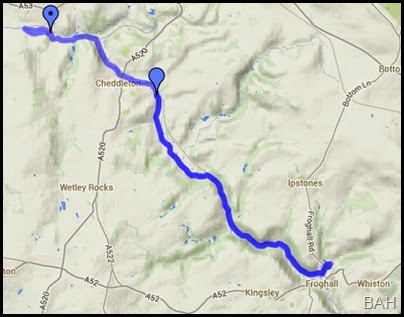