We set of at 1020, I wish I had stayed in bed another hour as this is what we found at the first lock, a queue. We were there 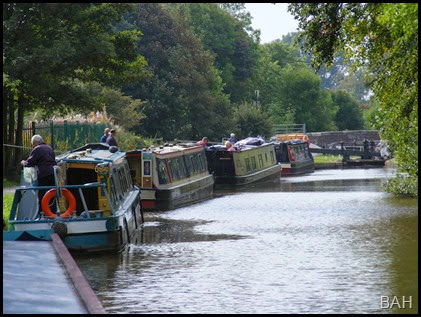 for just over an hour and only one boat behind us. after this things singled out well, but the time some people took coming into or leaving a lock is unbelievable. There are 4 locks in this flight, but originally there was a staircase on a slightly different line, it joined the present line at the top of the third lock, 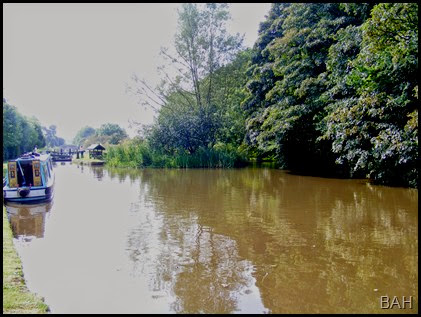 Meaford Road Lock.  It came in on the right.

Below the locks someone has put a pair of old lock gates to very good use as a landing stage at the bottom of their garden. We stopped for a few hours in Stone and did a bit of shopping as well as a bite of lunch. Once back onboard we arrived at Stone Basin just as Canal cruising Holidays were seeing their final boat off down the lock. They instructed the hires at this lock and then made that were OK by accompanying them to the next lock before waving them goodbye. One of the dry docks at Stone is interesting as it has what looks to me a curved wooden lintel above the entrance. It would be very interesting to know how they bent such a piece of timber to that shape. I guess its a listed building, I wouldn’t want to replace it. 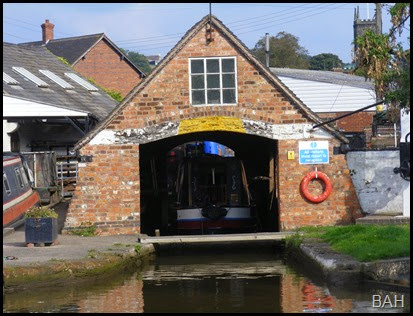 We bid goodbye to Stone and carried on to Aston lock where we watched the Black Prince hire boat first try to turn into the marina and finally reversed in. I have no idea what his plans were. Another mile and a half and we pulled over for the night at about 6 pm just before Upper Burston Bridge.