A very warm night last night, we had the hatch open all night.

Departed at 0840 this morning well before the sun was out. This pair of Swans have done well rearing 8 cygnets. 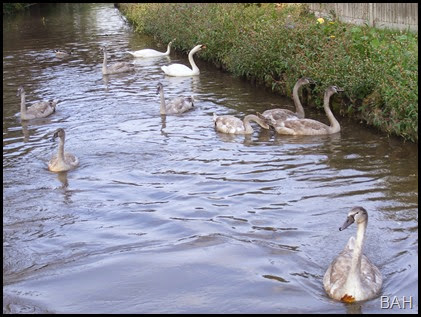 A quiet run to Atherstone but we still managed to meet the only boat of the journey on a bend with a large willow overhanging on the offside.

Passing Grendon Wharf the home of South Midlands Transport there is an old butty just right for refurbishment.

Just before we reached the Atherstone flight this train of slam

door coaches went by, it was pulled by an electric engine which is not normally see pulling passenger trains in the UK.

We winded at the winding hole just before bridge 48 and reversed back to the foot of the locks where while we waited for a call from Graham to say he was on his way, Diana washed the side of the boat. This is not the best side and I have had to patch the paintwork in several places.

11 am and we started our walk up the flight assisting a few boats on the way, we arrived at the top just in time to see Graham and Brenda approaching the bridge above the locks and the boat ahead of them dropping down in the top lock.
We were soon on our way down, Brenda steering and the three of us lock wheeling. We met boats at most of the locks to start with but it soon became obvious that other boaters had stopped for lunch and we started turning locks. The visitor moorings below the A5 road bridge have now all been designated 48hr moorings for some reason.
It was just on 2 pm when we reached the bottom, they carried on to the service point while we had a bite of lunch before joining them to top up with water. We then travelled together back to where we were moored last night at Polesworth. 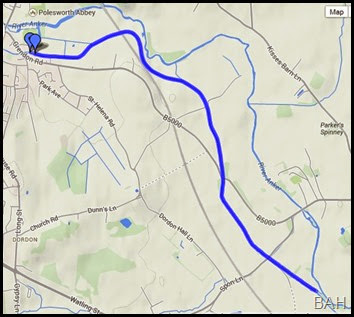 Today’s Journey 5 miles, 2.5 in each direction. We did loads of locks but the boat did non.