We left a 10 and met boats all morning, 16 before we reached Leek terminus.

There are a couple of hydraulically operated lift bridges on this canal, much easier than the one at Warings Green. 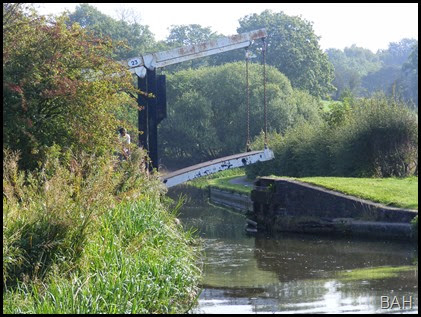 We met boat at every lock, sometimes one leaving and one arriving, we had to wait due to a couple following so closely the second boat was turning the lock while the first was waiting for us to exit the lock below.

Some of the locks the masons marks are sill quite visible on the stone blocks.

There is an old railway bridge just below lock lock 7 and quite surprisingly it still has its rails in place, just waiting for a train to come. 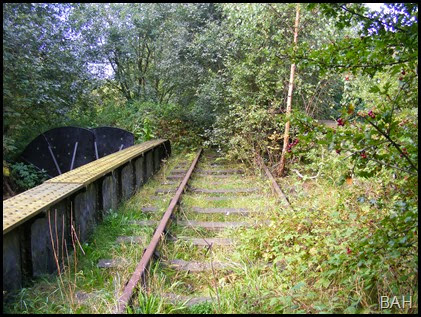 There is an old Waterworks standing by the canal, its such a shame to see such a building falling apart, just think what a great hotel or wedding venue it would make. 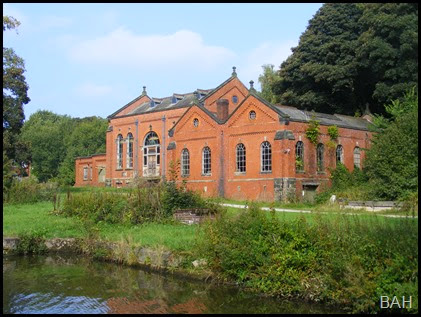 We passed the correct side of the keep left  notice on the base or the old swing bridge, I wonder what happens if you go the 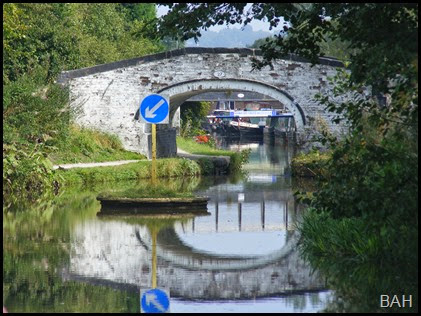 other side and then turned sharp right at the old arm, now the home of the Stafford Boat Club as can be seen in the distance.

There are a lot of tow path refurbishments being carried on along this canal to make life easier for the cyclists. There are a couple of places where it looks as if they have had to pile the bank so maybe we are getting a little benefit from it. 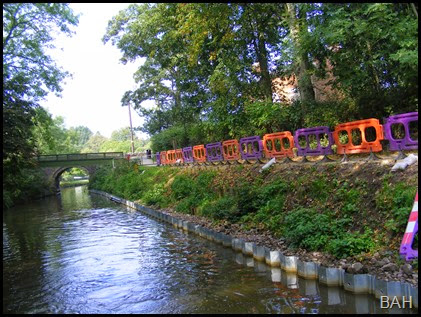 I had been told that the canal had recently been dredged, it doesn’t look as if they made too good a job of it here seeing how far from the bank this boat is moored and it doesn’t look to be sitting that deep. 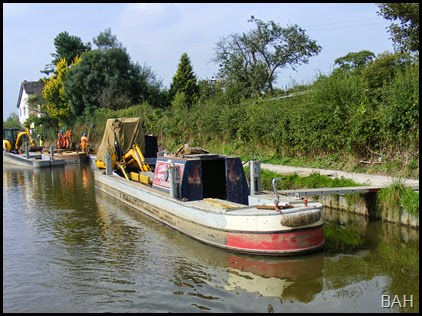 A short way further on it was a bridge that was getting the treatment, I wonder if WRG put a price in for the work? They say 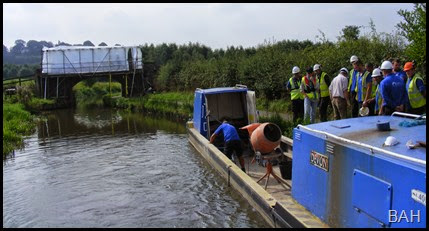 At Hazelhurst Junction we turned right onto the Leek Canal. This is only a short canal, about 3 very bendy miles, some of them very sharp like at bridge 3 where the canal turns to the left through 90° to cross the Caldon on an aqueduct. 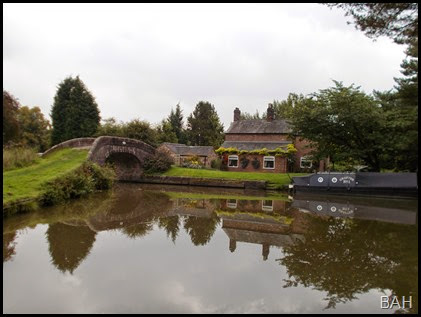 There are several bridges but only one tunnel on this canal and no locks. The tunnel has been restored and about a quarter of its length is lined with concrete sections the rest of the top section 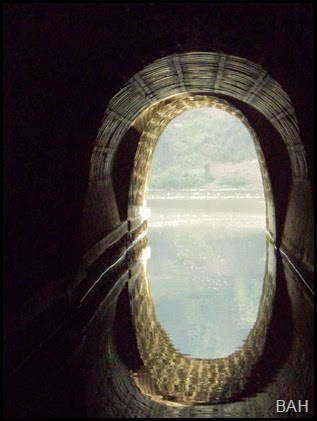 is stone, but it looks like concrete again from just above the water line down. The profile of the tunnel is quite high and narrow, it looks a tight squeeze, but its fine. 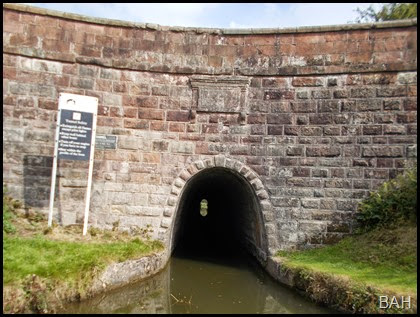 There is a winding hole for full length boats just through the last bridge with a notice warning any boats over 45ft to wind here. 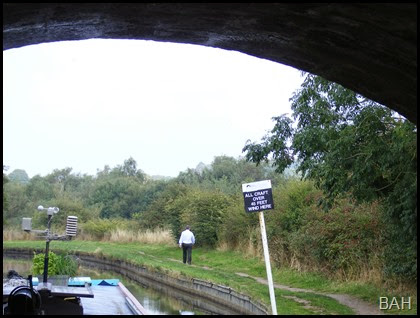 We  carried on to the very end where the feeder stream from Rudyard Reservoir for the canal comes in. 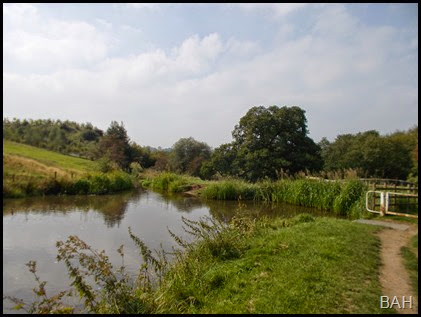 It use to run to Leek station but was filled in to build the industrial estate. 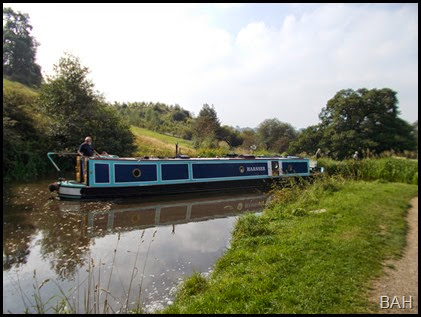 There are actually mooring rings along this stretch but due to the weed growth along the edge you couldn’t get close in to use them. There is quite a bit of very soft silt in this section because so few boats actually go to the end, well like us you have to reverse back. We moored just above the winding hole and walked into Leek, this involves traipsing though the industrial estate passed scrap yards and chemical works that are now built on the line of the canal, then through Morrison’s supermarket car-park and up the hill to the town. Not an over inspiring place, we saw one 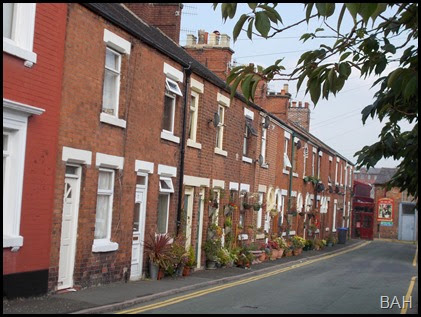 pretty row of cottages and lots of takeaway and charity shops. The cobble streets that the guides go on about are now brick-weave.

After returning to the boat we retraced our steps to moor just before Hazelhurst Aqueduct, here there are steps leading down to 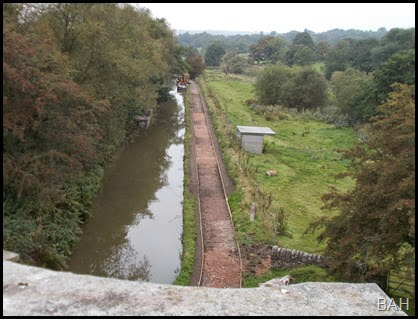 the Caldon canal and on its banks stands The Holly Bush, Denford where we were planning to have dinner. Just before we reached the aqueduct we passed an old friend on his new boat, well new to him that he is busily working on before moving on board to live.

Tonight is a full moon its also known as The Hunter’s Moon and the night is a cracker. I just wish I had a better photograph to show you. 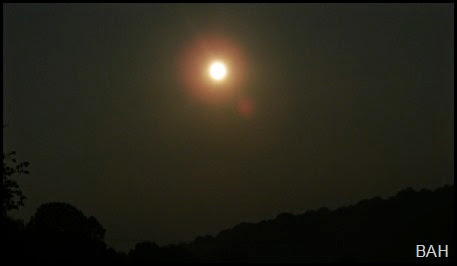