The boats were on the move quite early this morning and at quarter to ten there was a lull in the traffic so we set off. We had just dropped Whitchurch lift bridge when a boat appeared behind us, so at the next bridge we waited for them to come through as well, they returned the complement at the following one where things first got interesting with 3 boats coming the other way, the first seeing us stopped dead in the middle of the cut and the ones behind sort of milled about. It stayed reasonably quiet and we made a decent speed until we got to Tilstock Park lift bridge where there was a boat coming the other way and some waiting to go through in our direction, we were now tail end Charlie on a convoy of 7 Narrowboats and no one stopped at the bridge to close it, so we did it.

The convoy was a bit slow as the front ones stopped at every bridge but on the whole we were getting along nicely meeting a few boats on the way. Again at Whixall Moss lift bridge someone going one way or the other opened the bridge but no one stayed to lower it again, on this occasion the boat ahead off us pulled over and passed a windlass to a walker to drop it because he couldn't get there due to a fence. One boat left the convoy going down the Prees Branch, but we were soon up to full strength when another tagged on the end at Hampton Bank.

We chugged steadily along until we got to Ellesmere tunnel where again we came to a standstill as each boat stopped before entering the tunnel and proceeded through at snails pace. We moored for the night on the junction rather than going down the arm to Ellesmere town.
Today's trip took approximately an hour more than I estimated it should have so Tesco has to wait until the morning.

There where a couple of spaces down the arm when we arrived but we decided to stay put just at the mouth of the arm on the junction, I hope we are just clear of the crash zone for boats coming from Llangollen heading downstream.

I only took one photo today, these cows having a drink. 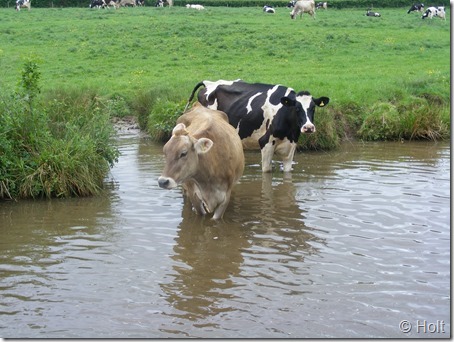 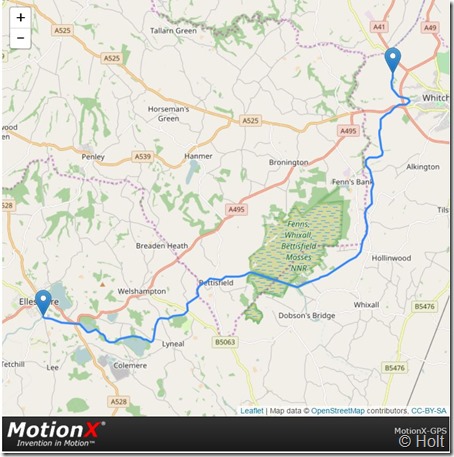 Posted by Brian and Diana on NB Harnser http://nbharnser.blogspot.com at 15:58