Lovely quiet mooring last night, one to put in the book. We set off at 10am this morning about 10 minutes after another boat had passed so hopefully they would be clear of Cholmondeston before we arrived, it didn't quite work out as a boat pulled out in front of us so we ended up following them to the lock. There was a steady stream of boats in each direction and we were soon on our way again.

We chugged along steadily to Barbridge Junction where we threw a right hander. I love the chimneys on the old lock house. 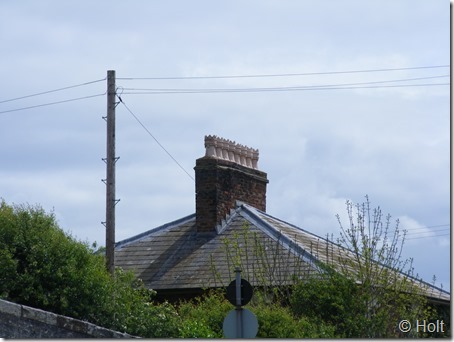 Then it was down to Calveley Services to fill with water, its quite a slow tap and this boat who caught us up after we came out of the junction passed us as soon as we pulled in. 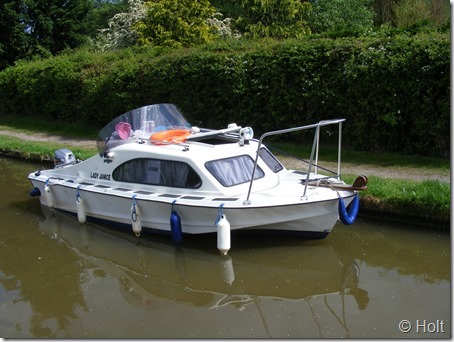 When we reached Bunbury Staircase Locks the little cruiser was just setting the lock, I don't know what had happened as they were a good quarter of an hour ahead of us and nothing had gone down ahead of them. I entered the lock first, he wanted the left so he could attach two ropes to the bollard, there are no bollards on the right and the wind was blowing from that side so until the lock dropped it was hard work holding Harnser off him. Just as we closed the top gates nb. Elizabeth came in from below, no problem, just do a shuffle. I bet Jim has never done a shuffle like this before. The locks equalised and the middle gates opened, I went forward in beside Elizabeth, the little cruiser moved over and forward to hang onto the ladder on the right hand side of the top pound so that Elizabeth could enter the top lock. Once Elizabeth was in, he then came forward behind me and went round my stern so he could again be on the left hand side to attach his two ropes to the ladder. When the lock was empty we let him go first and then we moored up for lunch, I didn't feel like shearing any more.

While we were having lunch several boats passed in each direction.
When we set off again we had the locks to ourselves but we did meet a couple of boats coming up, both who then moored on the lock moorings above the lock and no they weren't hire boats.

Some of the locks down hear have round buildings beside them. 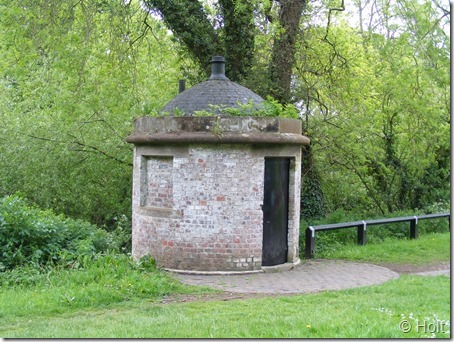 I can only assume (until some one puts me right ) that these were for the lock keepers, even the doors are curved.

By now the weather was getting warmer and brighter, although it hadn't rained all day and I didn't need a fleece it was not tee shirt weather.

Of course we had to pass through Beeston Iron Lock, the whole chamber is made from sheets of iron and even the recesses for the to gates are the same shape as the brick locks down here. It was put in to try to combat the ground subsiding and moving the lock walls. 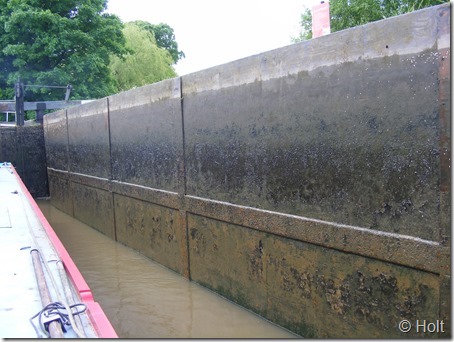 When we left the lock a boat pulled out from the bank some way ahead of us and we followed them to Wharton's Lock where they pulled over to visit the Shady Oak pub, we carried on to moor outside Tattenhall Marina for the night. As we made our way down this last pound Diana spotted a fox in a field on the off side, but before I got the camera ready he had moved on running across the field and through a hedge, when he got to the gateway on the far side, for some reason he just sat in the sun. 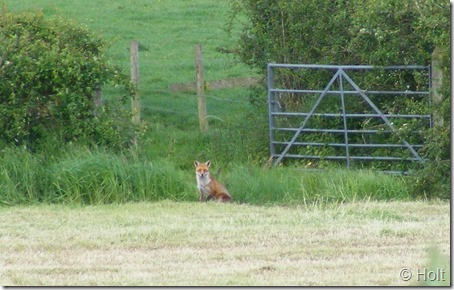 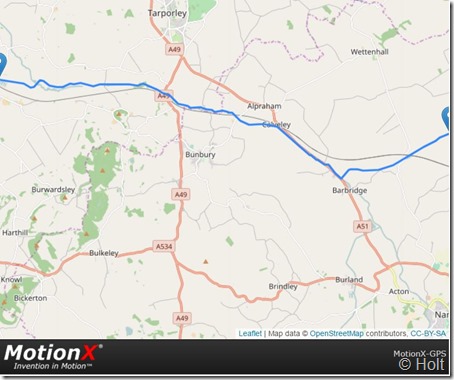 Posted by Brian and Diana on NB Harnser http://nbharnser.blogspot.com at 18:43