What a difference a day makes, yesterday blue sky's, bright sun and no wind. Today it started raining when we got up and its still raining. We were away a little earlier at about 9-30 as the first boat went past at 6-30 and at least 8 had gone by before we set off, having said that we didn't meed any boats all the way to Fradley 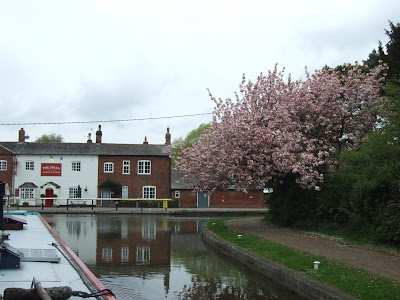 Junction. At the junction we swung left up the locks both manned by Volockies, one of them said he had been there since 8-30 and we were the only the second boat to pass through.

HS2 are making progress at Woodend, they have now cleared the off side  between Shadehouse and Woodend lock where the track will be crossing the canal and planted dozens if not hundreds of trees above Woodend lock behind and beyond the moorings. We met a few boat on this pond, one of them just as I was about to go under Bridge 60 with a right angle bend just the other side, where it wraps round the churchy yard. I had dropped my speed but a touch of reverse to my bum into the silt, but he was able to slide through on the wrong side. We only went a short way after this to moor to the heavy piling opposite the allotments just before the Plum Pudding, no Italian for us tonight, lets hope they are open next time we come this way.

Due to the heavy deep profile piling we have wheelbarrow wheels down as fenders, this turned out to be very fortunate as we had a day boat go by, somewhat faster than I would have liked which pulled us over shooting things out of the cupboards, but thanks to the wheels no banging. 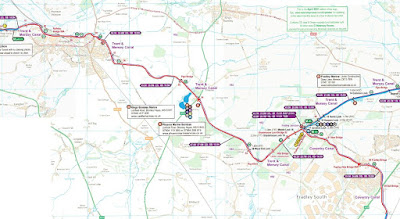