Last night or moorings outside the basin were not the most physically secure, there was a nice heavy ring right at the stern but nothing at the bows so I drove a Vine peg into the joint of the bricks, the pin only has a 5mm hole so I had to put a loop of cord through it and secure the bow rope to that. We were fine all night because Christine was moored outside us, her boat is a bit longer than ours, so she was on our stern dolly and her bow to the boat ahead of us stern dolly, so we were trapped in. This morning when she left while I was in the shower the cord snapped and our bows drifted across the cut. The good point was the vine peg held so I think it was probably due to the sharp edges on it. So it was a quick half dry, some cloths on and put matters right, I decided the easiest thing to do would be to move off and reverse back to the C&RT pontoon at the end of the town arm and have breakfast there. Once breakfast was done we set off and joined the queue for the Walsall Locks. The BCNS had a couple of their members helping which speeded things a bit, but one boat breaking down just as he was about to enter the bottom lock didn't help. A couple of us bow hauled him in and also up the second lock while he played with his engine. He then pulled over and let others pass him until he was sorted just in front of us. Everyone mucked in and helped each other and things ran quite smoothly. At the top of the locks I pulled over and spent about half an hour down the weed hatch removing what felt like sail cloth but was probably some garment of sports wear. I couldn't identify it as I had to cut it up under the surface with a Stanly knife, Two chaps on Community Payback who were litter picking walked by just as I finished and added the spoil the their sack of rubbish. At least two other boat and a butty passed while I was doing this but at Birchills Junction they went left to Wolverhampton and we turned right to Pelsall Common. The journey was a bit slow as we caught up with an extremally slow boat and the last two miles were done at 1.8 mph. We had a couple of showers on the way and even met another boat, something I didn't expect before mooring on the Common. It wasn't long after we arrived it really started raining and since then we have also had thunder but its been bright all the time.

Finally a big thanks to the BCNS for organising things, this is the 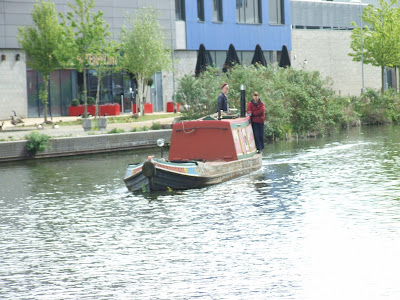 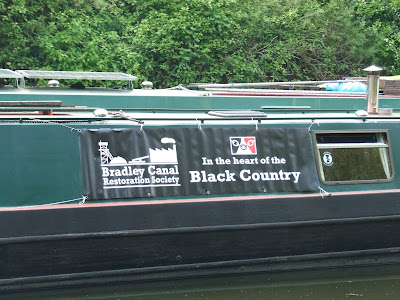 Society for his excellent guided walk up the line of the old navigation. 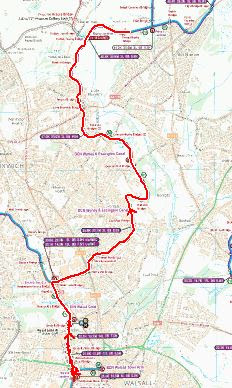