Thanks to Tom for pointing it out and Nick for sorting me out the link now works to show our planned route for this trip,    https://canalplan.uk/journey/14752_cp and will be updated from time to time.

Well its been a sort of stop start day, the weather was better than yesterday  but it was a rough old night, today has ben showers a little sunshine and quite a bit of wind.
We shoved off a little before 10am and didn't meet anyone in Armitage tunnel which was handy. One of the boats on the long term moorings has a rather interesting figurehead, but it looks a bit venerable to me. 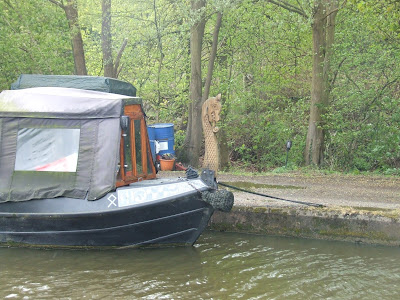 Our first stop was for water, unfortunately there was a boat there well before us so we tucked in behind it getting our stern rope on the last bollard and a pin for the bows.  We had to wait quite some time until he moved off as he was using an expanding hose, people 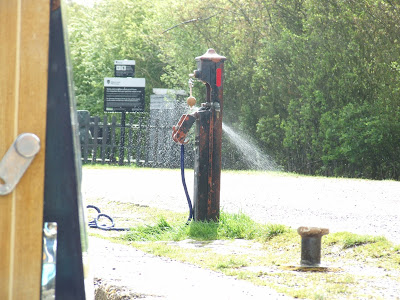 just don't realise the amount of restriction they cause, but just look at the pressure behind these leaking joints, with a straight hose there would have been a dribble at the most. Once they had gone, relocking the tap before they left we moved back and filled up in probably half the time we waited for them.

Then it was off to Rugeley, on the way we passed this Swan just 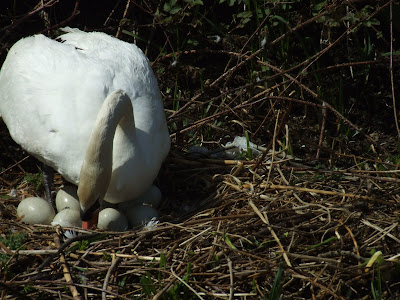 titivating her nest of eggs, we managed to moor right outside Tesco for Diana to get a couple of bits and pieces we had forgotten to bring with us. One or two boats went by but nowhere the amount of traffic as Sunday again there were no where near the number of boats normally moored in the area, non at all beyond bridge 67. Just along from her a house on the offside has started displaying manikins and the collection is growing. 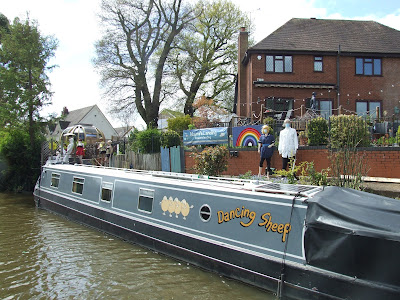 They even have a Facebook page https://www.facebook.com/naomislanding .  It wasn't long before we met a boat and the steerer advised me that there is a piece of iron sticking out below the gates of Colwich lock on the water line and below. One of the houses a short way before Colwich lock has had a tree felled in their garden and instead of felling the trunk they have had it carved into a Woodpecker with a hole through the trunk where the beak is. 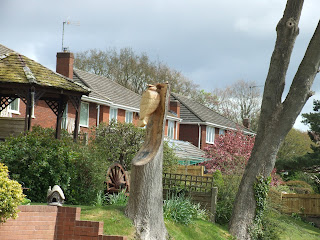 At the lock we had to wait for a boat going up, so I went to look at the iron sticking out. Its a vertical guard iron just in front of the heal of the gate. it has come detached just above the water line and the section below is now bent out into the mouth of the lock. I have reported it to C&RT with their online form, but you can't include photos.
We didn't meet any and there were very few boats moored between here and Haywood lock, once through the lock there were only four boats moored all the way to the junction. A brief stop at the junction to dispose of the rubbish and recyclables before heading along the Staffordshire and Worcestershire canal. There was plenty of room to moor on Tixal wide but it was very exposed so we continued on to moor a short way before Tixal Lock where its a lot moor sheltered. Since we have been moored up the sun has been shining and no more rain. 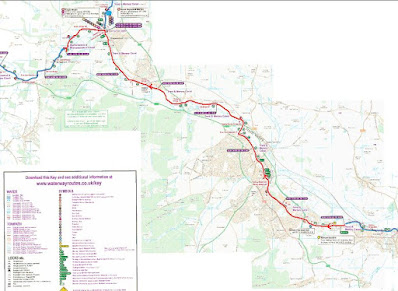 This is a 'shared' route - you need to be the owner of the route or to have the correct key to be able to open it. Please contact whoever gave you the link and ask them to change the permissions to 'public', or to give you the access key

Brian the hyperlink worked for me!