I was expecting more noise last night but we both slept well and woke to a bright sunny morning. Made our normal 10am start down the flight, the top lock was full unlike the rest. Progress was good but I did have my doubts below lock 4 which was well down, Diana was prepared to let a bit of water down if needed but I took it very slowly and made lock 5 without mishap.
The enlargement of Alexander stadium beside the lock is huge and coming along well, it has to be finished by next year as its the venue for the 2022 Commonwealth Games. It was too big to photograph so I shot a short Youtube video.

I said all the locks were empty, well it wasn't quite true, lock 8 was full and once we had drawn the bottom paddles the reason was obvious, I suspect the cill is full of rubbish. C&RT are now aware.

I mentioned the sun, we were just leaving lock 10 and it chucked it down with hail so we stopped under College road bridge for a few minutes while it passed over. We carried on down the flight in pleasant weather.
Following all the work on the M5  motorway where it straddles the canal they are now working on Spaghetti Junction wit scaffolding, plant and areas covered in. 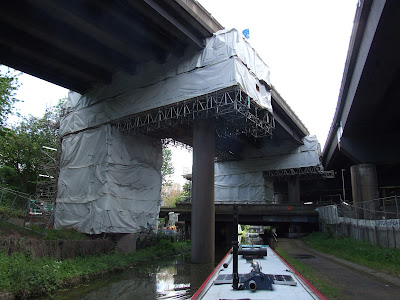 It was just after this that we saw the first and only boat on the move, it was about to exit the Grand Union  canal at Salford Junction as we went by, they passed us latter when we were moored up, we did pass another boat moored outside the Boat in so its been another busy day. We moored for the night just before Wiggins Hill Bridge, Minworth. We normally moor by the Cuttlebridge Inn but thought this may be quieter. Although its fin and sunny now the wind keeps picking up above 20mph for short bursts.