We woke to a very overcast and quite cool morning. As we were moored just a few yards from the water point we moved forward and filled the tank. While it was filling I walked up and had a word with the lock keeper about locking up. While we finished topping up with water he drew the bottom paddles to get rid of a couple of foot of water and then opened the bottom gate for us.

The gates on these locks are opened and closed by a mechanised finger that is pivoted just in front of the gate hinge, I expected them to be operated by a long ram. 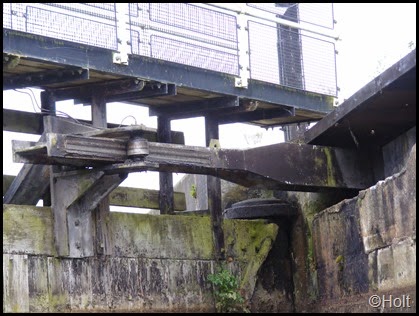 It was just as well we left when we did as the lock keeper got two calls one from the Acton Bridge boat club who were on their way and also from Dutton lock who were sending a bunch up so we could have been in for bit of a wait. The locks fill very gently and although they take bow and stern lines a centre line would be fine, especially if you are in the back half of the lock where there is no movement.
I have posted a short video on YouTube

We were soon on our way back towards Northwich to do a bit of shopping. The old chemical works along here at Winnington which now looks derelict. I find the construction strange. It’s basically steel framed but with a lot of brickwork with windows sitting on steel beams, I wonder why they didn’t just clad it. 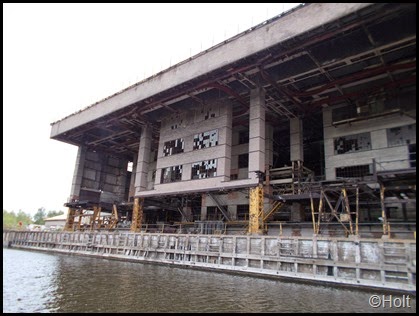 Even the front of the canopy is brick work, it must weigh tons as it must be 10 feet high. you can see the broken windows in the internal walls. We moored up in Northwich on the town moorings and walked into town to go a bit of shopping, when we returned at lunch time all the moorings were full and a couple of boats had moored to the railings below the bridge. Thankfully the weather forecast was not quite right again and we were able to sit on the front deck to eat lunch. We didn’t want to stop here all day so after lunch decided to move down to just before the Anderton Lift on the edge of the park, by now the wind had picked up quite a bit gusting 30 mph at times. The Acton Bridge Boat Club had chosen this spot for their day out, there was plenty of room for us but there was also a clay pigeon shoot in progress right beside the river and moorings so we decided to move on.

As we passed the lift I noticed all these people in hi vis jackets leaning on the rail outside the visitor centre. 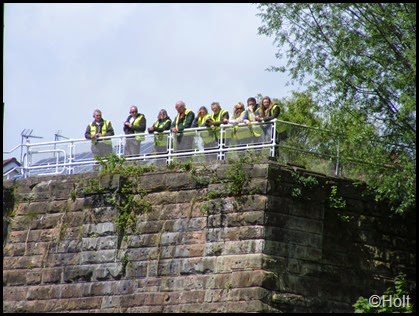 Our next choice was Barnton Cut visitor moorings, apparently this section of cut, its not actually the river, was and maybe is known as Blind Mans Stretch as indicated by the plaque on the seat.

I have no idea why it was called that and so far have been unable to find out. Likewise I don’t know who Tommy Shuttleworth was.

As expected someone knew about Tommy, in this case it was Chris who emailed me this link http://www.northwichguardian.co.uk/news/9301224.fisherman_tommy_smashes_fundraising_target/

When we arrived we found it quite windy so we retraced our steps about a quarter of a mile and moored in a more sheltered spot just round the bend. Since we have been here we have been joined by a hire boat from Middlewich and all the Acton Club boats have gone home to their moorings, I wonder if that is it until next year for them.

I think this heron almost opposite to where we are moored must be a resident as there was on in this exact spot when we went down to Northwich and was still there when we returned this afternoon. 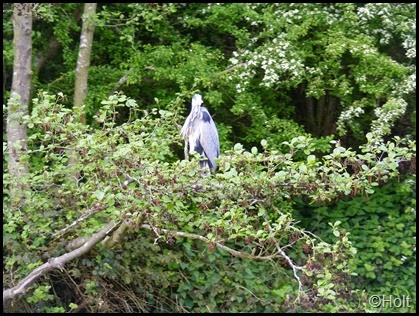 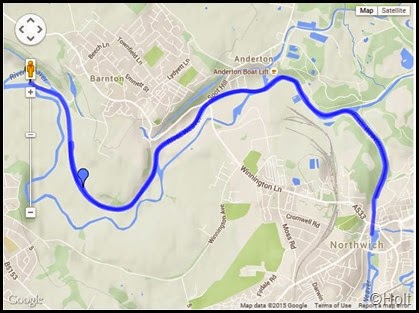