We set off a little early as we wanted to do a trip round Paradise Mill at 1145, but that was not to be.
While Diana had Royal Oak electrical swing bridge open a boat came up behind us so I waved them passed, in return they 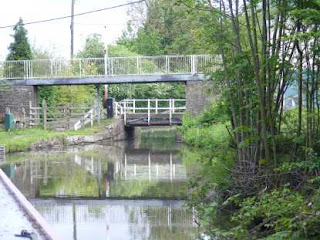 offered to do Broadhurst Swing Bridge a manual one. Just before we got to Broadhurst a boat pulled out between us, true to there word they opened the bridge and waved us both through but after that the boat that had pulled out got barely over 2 MPH. At the swing bridge there was also a boat going in the opposite direction and he got waved through as well, even with all that hold up the boat that stopped to open the bridge and let 3 other boats through before coming through himself and then closing up, still caught up with us by Gurnett Aqueduct Visitor Moorings where he stopped. We were only able to pass the boat ahead when he stopped for water in Macclesfield and we were only going about another 300 yards.
We were about to pull in to the 24 hr moorings just before bridge 37 when a boater coming the other way said the visitor moorings the other side of the bridge were much better and completely empty so we carried on to them and he was right, there are a row of floating pontoon moorings from just passed the bridge to the winding hole. The old Hovis mill in the background has been redeveloped since last time we were this way and is now looking very smart. 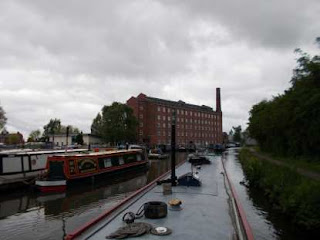 By the time we had walked down to the Silk Museum in Park lane it was mid day, so we booked two places on the 1 pm tour and went to Weatherspoons for lunch which is conveniently just round the corner. Here again Weatherspoons have taken an old building and tastefully converted it for modern use, It was originally St Michael's vicarage and then became the home of the Useful Knowledge Society and later addition a Technical School.
We had an interesting afternoon at the museum with the conducted tour of Paradise Mill which still houses a row of silk 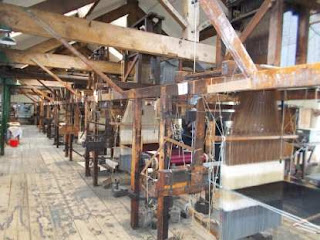 looms as well as other equipment used in the manufacture of silk. There were 6 of us on the tour and one couple tried their hand on the loom.

We also saw how the punch cards were cut to control the loom which enabled the patterns to be printed as well as  how the silk was twisted to make the threads up. 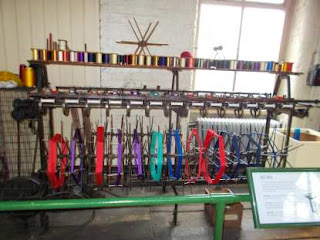 It was after 4 pm when we got back to the boat and decided to move on before mooring for the night. By now the weather had warmed up quite a bit and the sky had quite a bit of blue in it, we carried on for a little over an hour to Bollington where after 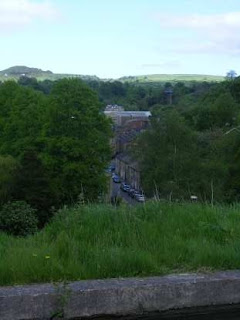 crossing the aqueduct we moored just before Clarence Mill on the end of a row of boats on the visitor moorings. The mill is so big and in such a location it is impossible to get a good photograph of it. You can just see the bows of the last boat on the moorings in the left of the photograph. 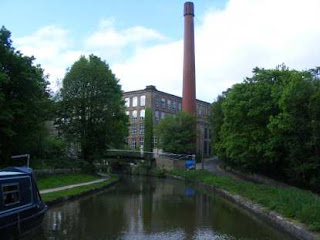 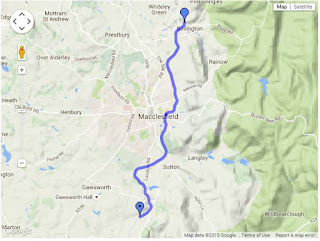